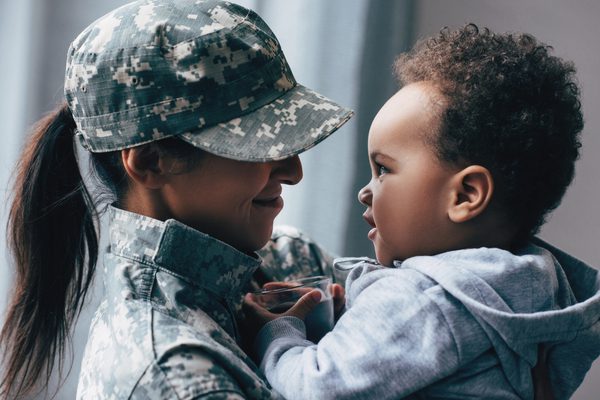 Having a baby turns your life upside-down. For many of us, it takes weeks and weeks to feel like anything is normal—from the lack of sleep to the dishes piling up in the kitchen.

But for military moms, life can be exponentially more complicated. Can you imagine jumping back into military life just weeks after adding a new family member?

But one military leader is out to make some positive changes. Commandant Gen. David Berger took to Twitter to announce that he would like the Marine Corps to research the drawbacks and benefits of offering new moms an entire year off before they go back to work.

Identify the costs associated with implementing a new one-year paid maternity leave policy, along with the benefits and risks, and make a formal recommendation. (3/8)

According to Gen. Berger, this is an extremely important matter—and we couldn’t agree more.

Berger wrote that the current leave policies are not adequate … that they simply don’t work for today’s society nor today’s workplaces.

“We should never ask our Marines to choose between being the best parent possible and the best Marine possible,” Berger wrote in his planning guidance.

Maj. Craig Thomas, a spokesman for the Marine Corps’ Manpower and Reserve Affairs, announced that the military is currently researching and considering changes. He also said that they have identified “several courses of action.”

Historically, the Marine Corps and the Navy had twice as many women as men leave the service at the six-year and 12-year marks. Ray Mabus, former Navy secretary, noted women often left when it was time to start a family. This was even if both members of the couple were in the military.

By using gender-neutral terms, Berger also included same-sex couples in his plans. He also stated he would like to change the policy for adoptive parents to be more inclusive.

We say kudos on all counts—ample family leave and inclusiveness are really something to celebrate!