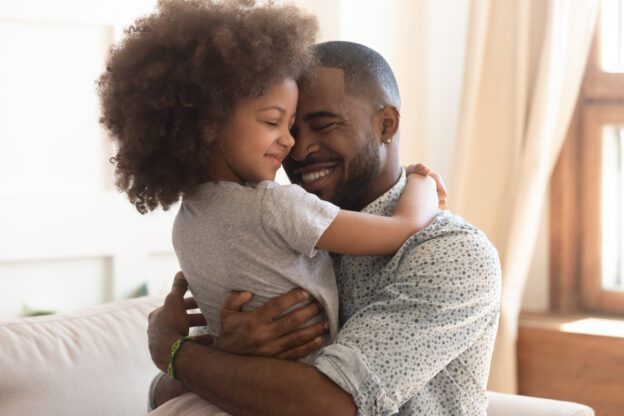 After basketball star Kobe Bryant and his 13-year-old daughter, Gianna, were tragically killed in a helicopter crash in January of 2020, ESPN SportsCenter anchor Elle Duncan shared a story about Bryant’s pride in being the father of girls.

Duncan recalled that Bryant told her, “I would have five more girls if I could. I’m a girl dad.”

“I would have 5 more girls if I could. I’m a girl dad.”@elleduncanESPN‘s story about how much Kobe loved his daughters is something special. pic.twitter.com/1KJx17QRjY

Soon after the segment aired, both celebrity and ordinary dads alike took to Twitter and other social media sharing photos with and loving stories about their daughters along with #GirlDad. The hashtag quickly went viral.

While some culture critics saw the hashtag’s popularity as a celebration of both fatherhood and girlhood, others believed it simply highlighted the assumption that men want sons, not daughters.

As Rebecca Haims wrote in an editorial for The Washington Post, “The hashtag only makes sense because we live in a societal context in which girls are routinely demeaned or degraded.”

As Father’s Day approaches, we turned to everyday dads of daughters to find out what they thought of the hashtag and what it’s really like to be a #GirlDad.

Proud to be a #GirlDad 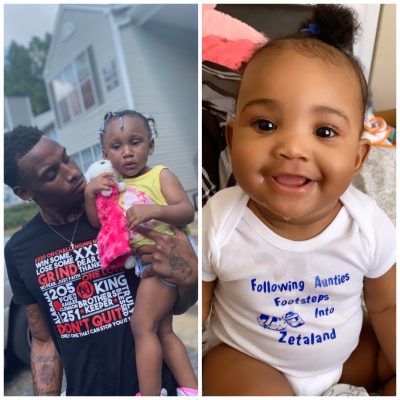 Tavin Cummings and his daughters Leilani and Trinity

“The girl dad hashtag was a great idea, although it came from an unfortunate situation,” Tavin says. “It’s very common for men to want boys to groom them and hopefully continue a legacy, but some of us prefer being a #girldad.”

“That hashtag allowed us to show the world just how proud we are to be just that,” he says.

Ced Delaney, father of 8-year-old Cydney and five-year-old Carsyn, saw the hashtag as a great way to shift the often negative narrative about fathers.

“Dads get a bad reputation as being absent,” Ced says. “I enjoyed seeing dads represented in a positive light.”

“You always hear the horror stories of bad fathers,” he says. “As fathers, we always need encouragement, and seeing the girl dad hashtag made you feel proud.”

Long before the viral girl dad hashtag, Kobe Bryant was already challenging the notion only a son can carry on a father’s legacy.

In 2018 Bryant told Jimmy Kimmel that fans would often say to him — with Gianna by his side — that he needed to have a boy to carry on his legacy in basketball. He said that Gigi would quickly respond, “You don’t need no boy for that. I got this.” And Bryant would reply, “That’s right. Yes, you do. You got this.”

“One thing I love about being a girl dad is getting my daughters interested in my hobbies,” he says. “My oldest likes gaming, computers, tech, and anime. My youngest has some of my passions from my younger years like art, drawing, and playing outside.”

Luis Perez, father of 9-year-old Alyssa and 6-year-old Tiana, says he can play sports, watch wrestling and go to football games with his daughters just as his brothers and friends do with their sons.

“I can play Teenage Mutant Ninja Turtles in the Barbie Dreamhouse with them,” Luis says. “It’s like the best of both worlds.” 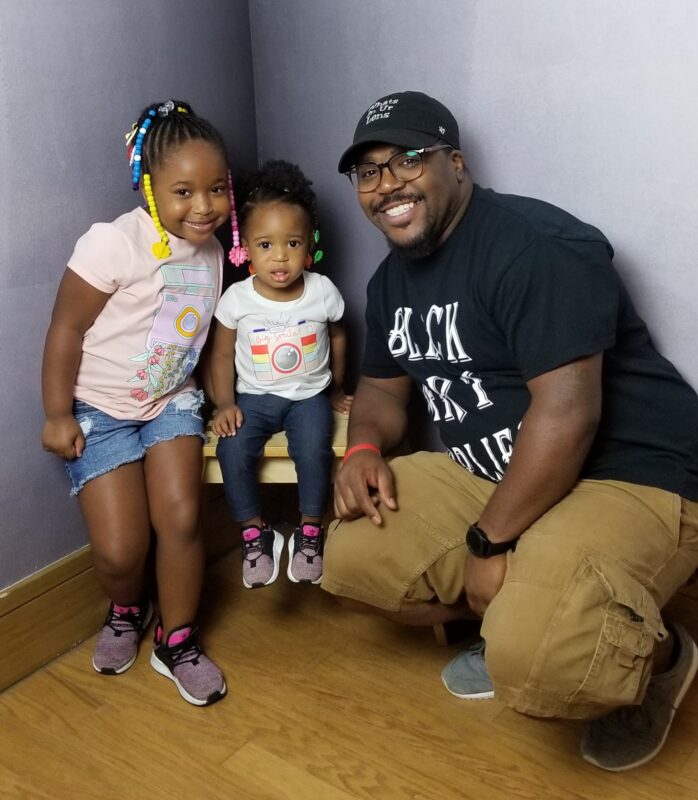 Cleveland Chambers III with his daughters Baileigh and Adrianna

Though Cleveland Chambers III admits he wanted a son, he says he loves that being a girl dad lets him show his softer side.

“Sometimes as a man, you have to be hard or tough, but with them, I’m allowed to get my hair and nails done and have tea parties and dance parties,” he says.

Will Marble — father of 12-year-old Gracie, 8-year-old Addison, and 7-year-old Evie — loves when his girls want to share with him a song they’ve learned or a fort they’ve built. He’s always up for a good tea party, too.

“And I love the times I get to cuddle with these girls when they need to be loved, acknowledged, supported,” Will says.

Robert Lewis is the father of three girls – 15-year-old Madaha, 13-year-old Makini, and 7-year-old Kinaya – and he has four sons.

He admits that he often assumes that men who don’t have sons wish they did. Nonetheless, he says he loves being the father of girls.

“A tradition that I started with my daughters is that at the age of ten, I take them on their first daddy/daughter date.  We dress up in our Sunday’s Best and usually go out to a restaurant that I can’t afford,” Robert says with a laugh. “I enjoy watching them be able to select whatever they want to eat from the menu, which they don’t get to do that often in our household of nine.” 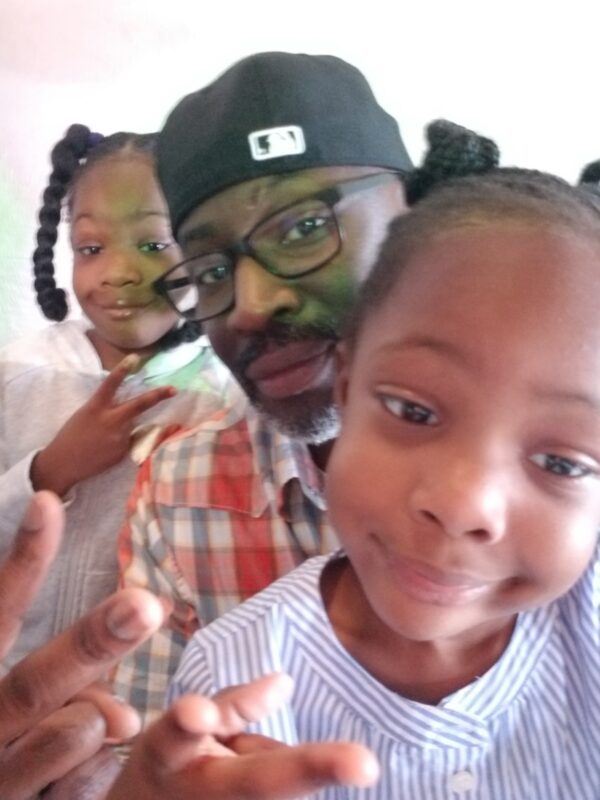 Ced Delaney with his daughters Cydney and Carsyn

Ced Delaney says he and his wife both wanted a son, but couldn’t be happier with their two girls.

“I think most men want a son, a mini-me,” Ced says. “But once you have a healthy child it doesn’t matter after that. I absolutely love my daughters and would not trade them for a son.”

What Manner of Man

Several of the girl dads we talked to agreed that they have a responsibility to show their daughters how men should treat them.

“Dads are their first experience with a man and we set a standard — good or bad,” Larry Robinson says. “This is something my wife told me and I try to remember.” 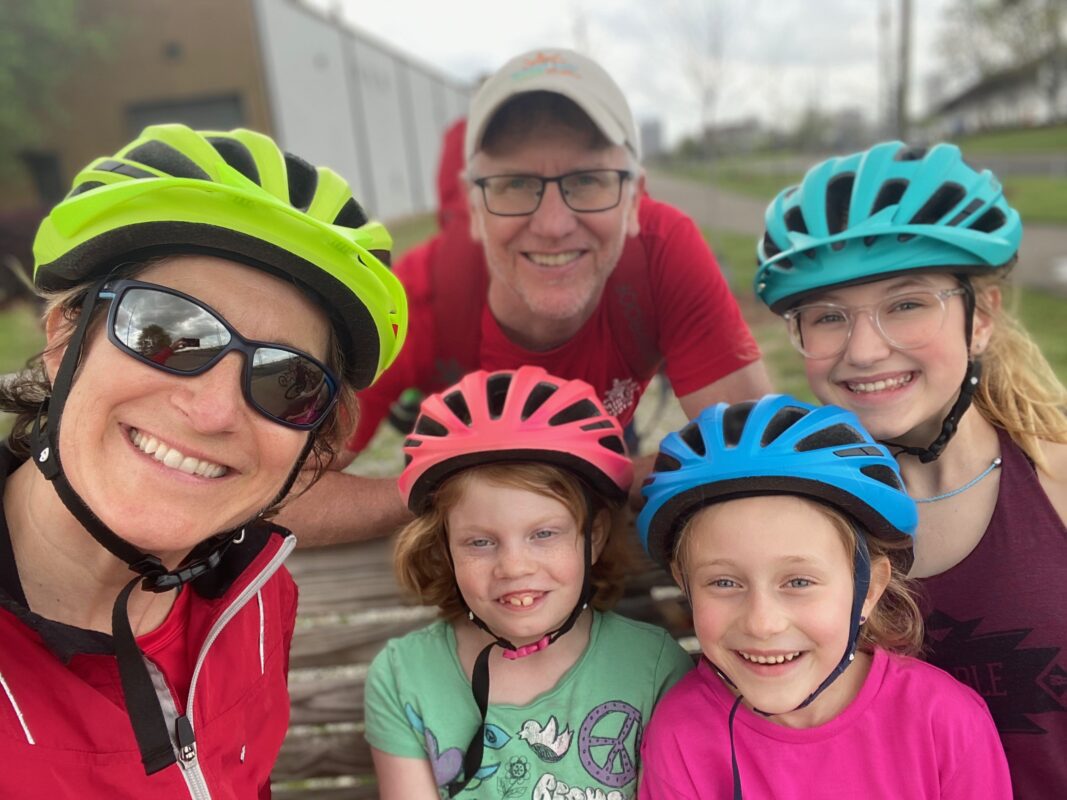 Will Marble with his wife, Dina, and their daughters Evie, Gracie, and Addison

Will Marble considers this responsibility an honor.

“I love that I am in a position to help empower them and to dispel common myths about what ‘being a man’ is about,” Will says.

He challenges the idea that men shouldn’t cry.

“I don’t hide emotion from them,” Will says. “Heck, I cry at commercials. It’s healthy for them to see that.”

He also challenges the notion that men should always be in charge. He’s careful to honor his daughters’ and his wife’s opinions, too. He believes this rejects the idea that women should defer to men when making decisions.

“I try to nurture my girls so they will stand up for themselves even when it is challenging to do so,” Will says.

Robert Lewis with his daughters Madaha, Makini, and Kinaya

Chances are you’ve heard men speaking against misogyny begin their statements with the phrase “As a father of daughters…”.  But there’s been widespread criticism of this sentiment. Men shouldn’t have to have daughters (or any female relative) to know that they should respect women.

Nonetheless, girl dads are eager to do their part.

“It is true that men with daughters better understand the importance of girls having the same opportunities as boys,” Tavin Cummings says. “As a father, it is my job to make sure my girls are comfortable with who they are and know that they can do whatever they put their minds to doing.” 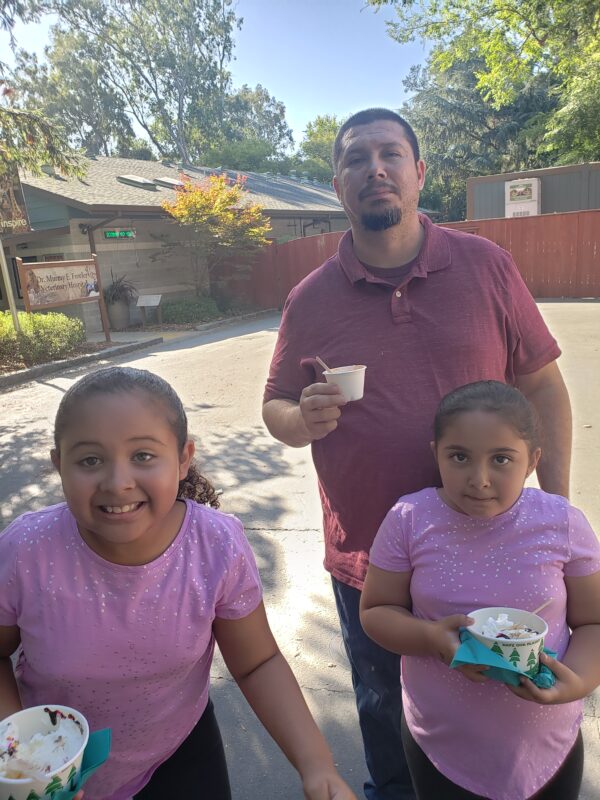 Luis Perez with his daughters Alyssa and Tiana

Luis Perez believes that when men take pride in their daughters it shows them that they are loved and supported and should go after their goals.

“Boys are usually raised to believe they can do anything and be anything and girls need that same encouragement,” Luis says. “I want my daughters to always be confident and never shy away from an opportunity that society usually reserves for boys.”

Luis challenges ideas about gender roles in parenting, too.

Currently, his daughters are asking him questions about periods, bras, and nail polish.

“Thankfully, my mother-in-law gave me a book to help with these discussions,” Luis says. “I don’t tell them to go ask their mom about female body changes, hairstyles, and things like that. I try my best to answer their questions because I want them to always feel comfortable talking to me.”

Larry Robinson says being a girl dad has shifted his thinking on a number of gender-related issues.

“I would like to believe that any father with a daughter would want them to have the same opportunity and pay as any man would,” he says.

Larry even understands why some women buck the trend of taking their husband’s last name in marriage.

“You put a lot of time and effort into your name and to be expected to give it up isn’t easy,” he says. “How many men are willing to change their last names to their wives?” 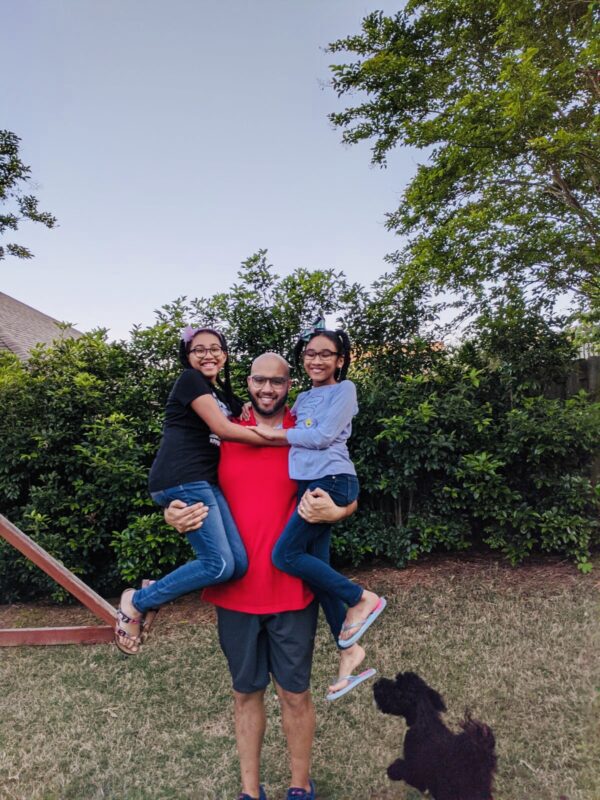 Larry Robinson with his daughters Eden and Waverly

“I cook, clean, and take care of the kids while my wife is at work,” but he doesn’t think he deserves any extra credit or bonus points for this.

“I don’t want a pass if my daughters look sloppy because dad dressed them or any applause for showing up to the mom events when mom is working to take care of the family,” Larry says. “Men should take pride in their daughters. Period.”

So when Larry was laid off from his job, he decided to focus his energy on raising his girls.

“I used to worry about my girls forgetting me since I’m not in many of their pictures because I was at work or taking the picture,” Larry says. “Now, they see me all day. I’m their teacher, cook, maid, entertainer, but above all, dad.”