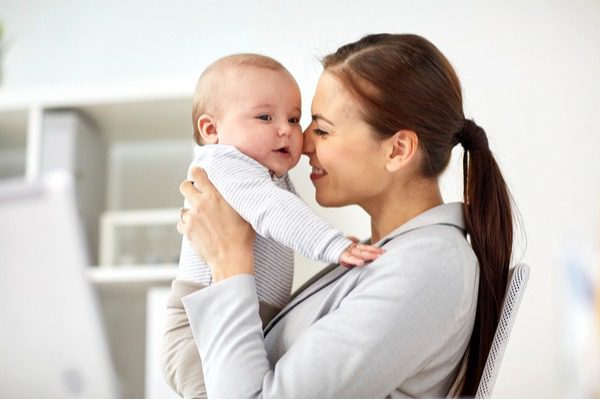 Starting January 1, New Hampshire state employees are getting a pretty awesome gift: the opportunity to bring their infants to work with them. Whaaaaaat?!

That’s right… Governor Chris Sununu just signed an executive order to allow parents and guardians to bring children between ages 6 weeks to 6 months to the office. In other words, no newborns and (mostly) no crawlers.

The employees also have to meet a few other criteria…

Ahem. That last one about limited disruption. Have they met a baby before?

So far, more than 20 departments and agencies are participating in this program. It’s being modeled after programs like this in other states like Washington, Arizona, and Vermont.

At a press conference, the governor talked about the reasons for the program.

“This initiative can provide working families with options to give their kids the healthiest possible start to life while allowing them to remain in the workforce if they choose to do so,” he said.

He noted that this program is a win-win for parents and the state, given that it could “result in increased employee retention, boost morale, and increased teamwork in a greater capacity among the participating parents.”

However, relatively few people are benefiting from this cool program so far.

“It’s not that many, to be honest,” the governor said, “but part of doing this is we hope it’s more. We’re trying to encourage and attract young people into the workforce.”

There are a few ground rules. Babies who are “habitually disruptive or sick” are not allowed to come to work, and parents bringing the babies also must ensure they comply with state regulations about immunizations. Parents can change diapers in the restroom only (so much for accomplishing that task on the desk during a conference call!). Oh, and parents won’t be bringing their little ones to any meetings unless it’s approved in advance.

What do parents think?

One dad, Shawn Hamilton, told a reporter that he finds the option great. “… Thinking of my daughter going to a daycare so young is something that I have been concerned about,” Hamilton said.

Governor Sununu also noted that plans are in place to keep the program on track in terms of health and safety. These measures will include safety checks of the work areas, following appropriate health procedures, and designating a care provider who is able to help when needed.

“We in New Hampshire don’t want to be behind the times playing catch up,” Governor Sununu said at the news conference. “We want to be proactive and pushing the envelope to see what opportunities we can provide for our employees.”