During a pregnancy with multiples, the goal is delivery between 32–34 weeks. I knew the closest I would get to full-term would be 35 weeks — after that complications can arise by the babies getting too large. I also knew that the longer they stayed inside, the shorter amount of time they’d need to stay outside in the NICU.

But, due to my development of HELLP syndrome discovered at my 30-week appointment, I would be delivering my babies several weeks before I’d wanted to.

I was frustrated that at 30 weeks my pregnancy was ending and that the babies wouldn’t stay in as long as I had hoped. I remember sitting on the edge of my bed in shock and sobbing as I called my husband and boss. Thankfully our bags were packed and we immediately headed to the hospital. 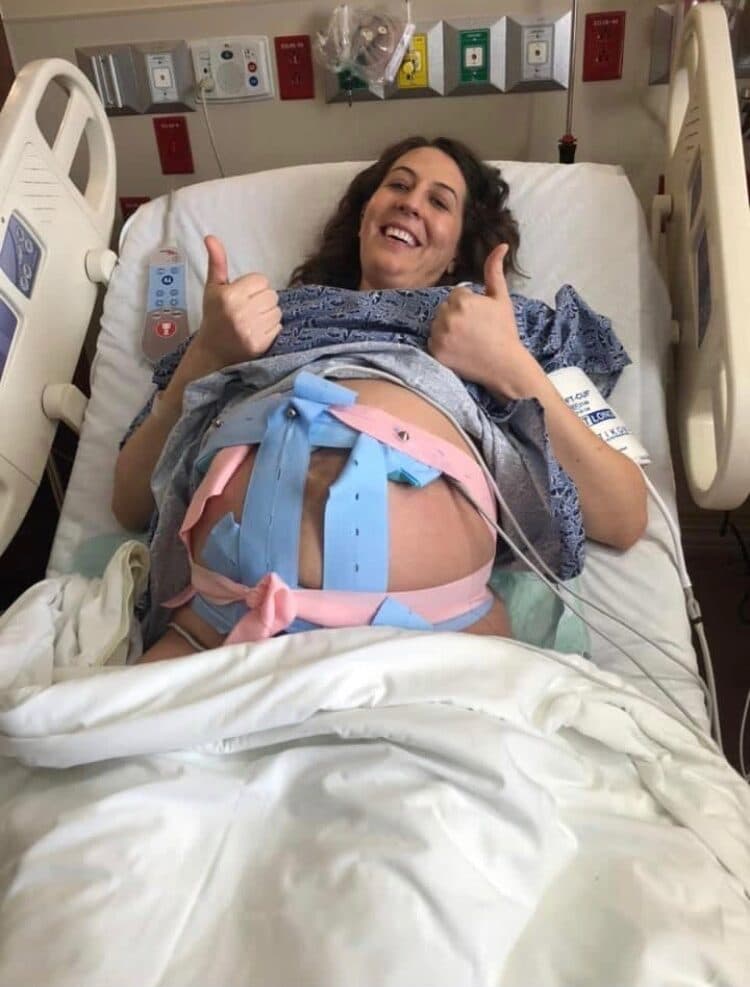 I was hooked up to three baby monitors and a contraction monitor upon being admitted to the hospital. I also had a catheter inserted; needless to say I was extremely uncomfortable. I remember laying there thinking that I wouldn’t be able to make it like this even overnight if we had to wait that long. That decision was quickly taken out of my hands when my doctor saw how low my urine output was and realized my condition was more serious than we’d thought. He informed us that we would be delivering that night, within a few hours. My husband and I quickly phoned family members to inform them of the news, then we suited up for the operating room.

I was so glad that my OB and MFM doctor were the ones that delivered. There were so many people in the OR for the delivery. My husband counted 20 people — several nurses assigned to me and the babies, the anesthesiologist, doctors, lab techs, a neonatologist, and even medical students along for the ride.

The birth went extremely quickly. I remember less than five minutes after the initial incision the doctor was holding up Baby A and I was thinking to myself, “Is that my baby?” It all happened so fast! We saw each baby briefly before they were whisked off to the NICU to be immediately monitored. The entire operation took less than 30 minutes. My husband was a rockstar the entire time. He kept checking on me and I loved seeing his reaction as each baby emerged, one after another. We held our breath waiting to hear each one cry out. Baby A: Rosalie was 3 pounds 14 ounces, Baby B: Harper was 3 pounds 6 ounces, and Baby C: Russell was 3 pounds 5 ounces. 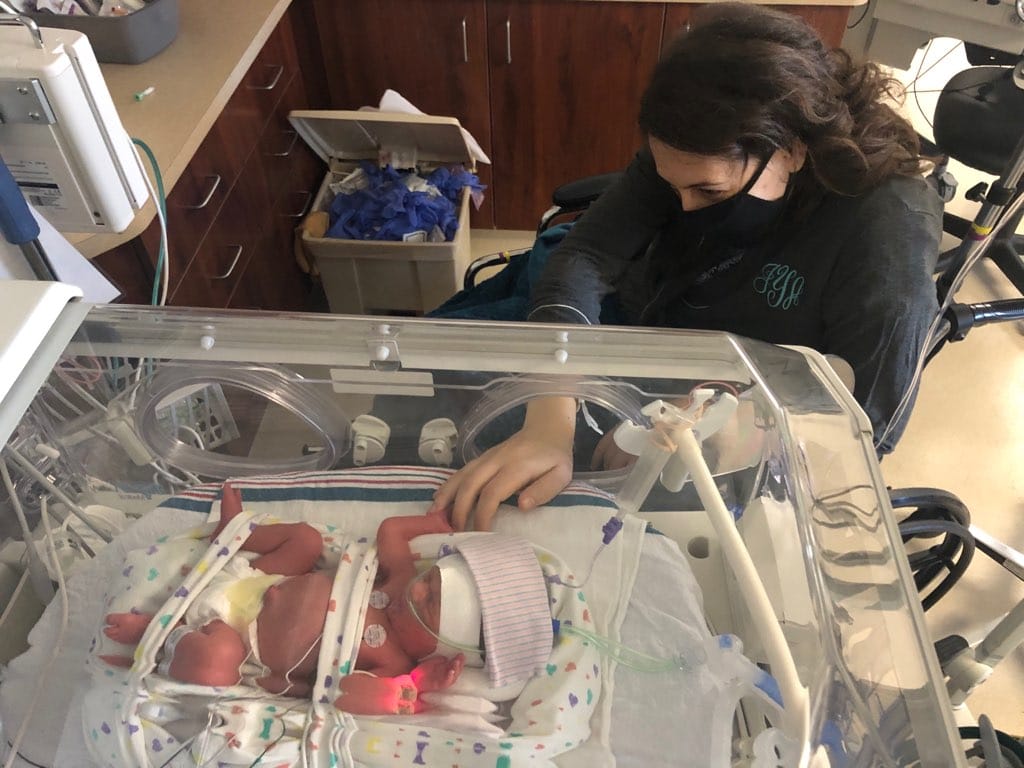 Before and after delivery I was on magnesium to help combat my preeclampsia. As such, I couldn’t get up and walk around because the medicine is a muscle relaxer. I also chose to forgo the heavy pain killers and try to heal on just a high dosage of Tylenol (an immediate regret). My husband was able to visit the NICU that night and meet the babies; I went the following morning. Not exactly how I’d imagined the birth day to go!

I knew it would be nearly impossible to breastfeed the babies, but I still wanted them to receive the benefits of breastmilk, so I chose to pump a few hours after birth to get those first few drops of colostrum. I was able to continue pumping every three hours to have it taken to the babies. My husband cheered me on every step of the way, running the colostrum and milk down to the NICU after each pumping session. I was so proud of what I was able to provide them.

Anyone who has had a C-section can tell you it is a strange and difficult recovery. I remember feeling as if my body wasn’t my own. Those days weren’t glamorous, coupled with the fact that I didn’t have my babies by my side, and I wouldn’t for some time. We knew going into the birth that 75 percent of triplets spend at least a month in the NICU. But that doesn’t make it any less difficult to emotionally and mentally prepare. 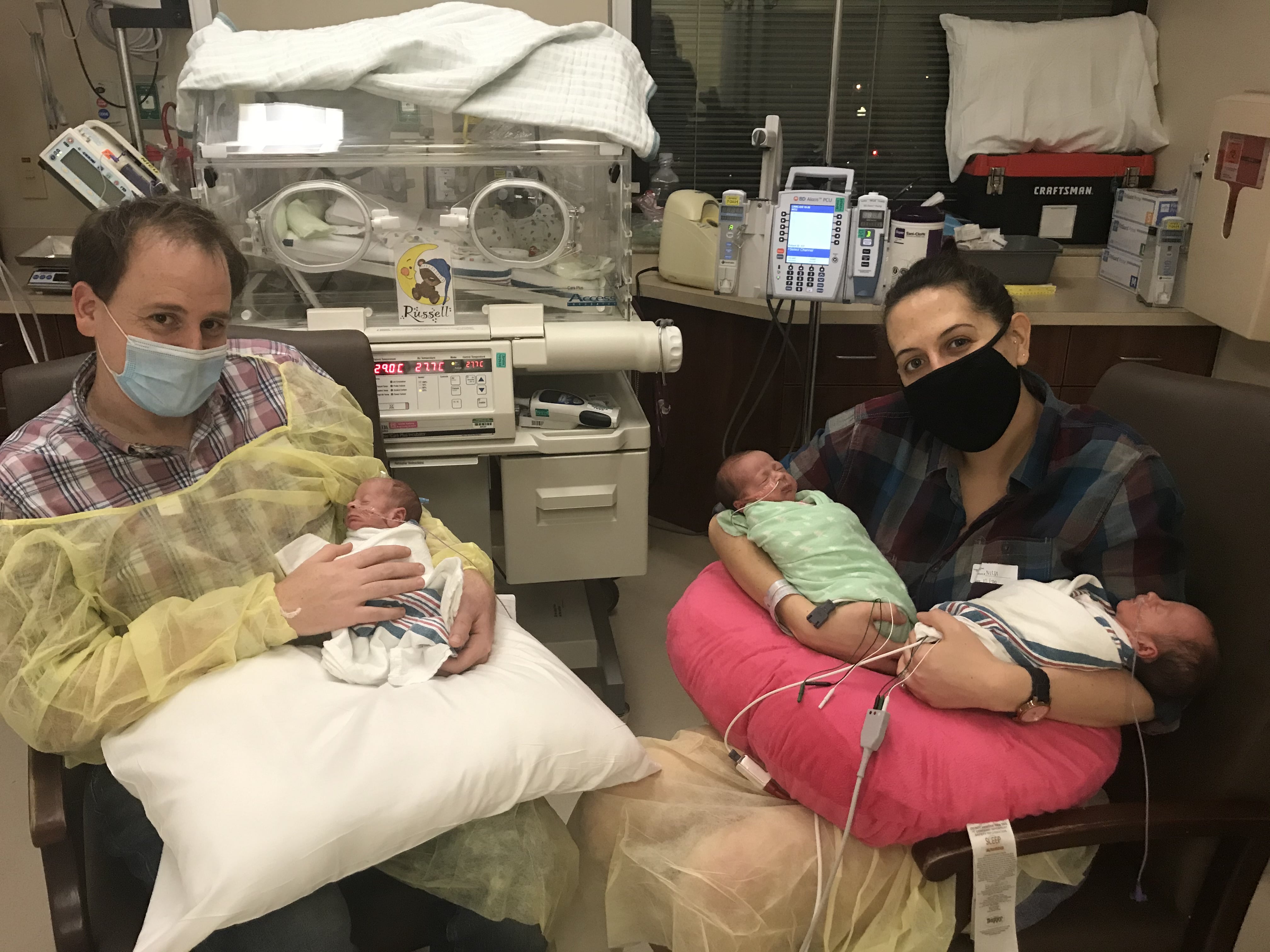 I stayed at the hospital four nights so I could see the babies twice a day and be as close to them as possible. Thankfully, none of our babies had to be on a C-pap to assist them in breathing. But they were connected to oxygen, lights, and many monitors. I left the NICU many nights in tears, but every time we visited we saw glimpses of their progress. From the babies being taken off oxygen to wearing clothes (proving they could regulate their temperature) to being bottle fed, each was a huge milestone.

The NICU doctors and staff were incredibly kind people. I had peace of mind knowing that I was leaving my babies each night in the best possible care. Due to COVID, my husband and I were the only ones that could see the babies. We could only visit once a day during a certain timeframe and we always had to have our masks on. Knowing your baby has never really seen your face is a strange sensation.

After six long weeks, our triplets got to all come home on the same day and see our full faces for the first time. We left the hospital (in the minivan we’d purchased a few days prior) feeling very unsure if we had what it takes to raise these three small, fragile little beings!

This story is part of a three part series:

Jenna Yeakley
Jenna is a former children’s librarian who lives in East Texas. She and her husband of 7 years live there with their 4 month old triplets, 2 cats and a dog. In their spare time (ha!) they enjoy visiting friends, playing board games and drinking coffee.