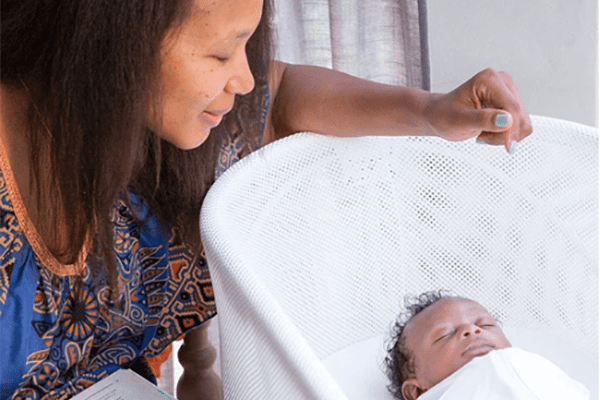 Babies and sleep will always be a hot-button issue for parents everywhere. Life with a new little one is beyond exhausting, and the world simply isn’t made for people who are up all night with a baby.

But the SNOO Smart Sleeper Bassinet is out to change that. Touting itself as “the world’s most awarded baby bed,” the SNOO reportedly boosts sleeping by combining a rocking motion with white noise and comfy swaddling.

This smart sleeper was created by none other than Dr. Harvey Karp (famous writer of “The Happiest Baby on the Block”).

The SNOO boasts a few serious benefits: First, it is said to add one or two hours of sleep each night due to the “calming womb rhythms.” Second, it reportedly adds safety by the secure swaddling, ensuring baby doesn’t move into a dangerous position. Third, it responsively soothes baby by responding to cries with “gradually more motion and sound.”

Here’s the kicker: It costs around $1,300—and while we know a good night’s sleep is worth a lot, this price tag is a bit hard on the wallet. Some parents are actually saving a bit of money by opting to rent the SNOO for about $118 per month.

However, SNOO recently turned heads by announcing that the sleeper was designated as an “FDA Breakthrough Device.” Translation? The FDA will be reviewing the SNOO to see if it can be dubbed a potentially life-saving device. If so, it may be labeled for use to reduce SIDS at some point down the road.

The FDA takes a long time to review medical devices … at times, even a couple of years. However, a review of the SNOO will be fast-tracked. And if it is approved, the sleeper will actually be the first product labeled to reduce SIDS.

We’ll certainly be watching for updates on this exciting story!

Has anyone ever tried the SNOO? Let us know in the comments!