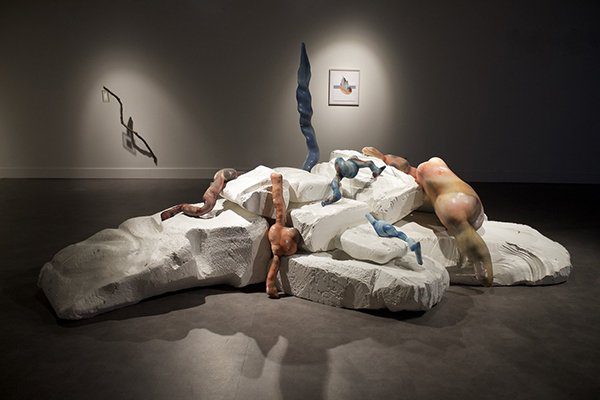 Most moms understand the feeling of entanglement…of being so wrapped up in a child that sometimes it’s not clear where mom ends and that child begins. Award-winning artist Lauren Frances Evans doesn’t just get it—she created an entire art exhibit centered on that concept.

Life as an Artist and Mom 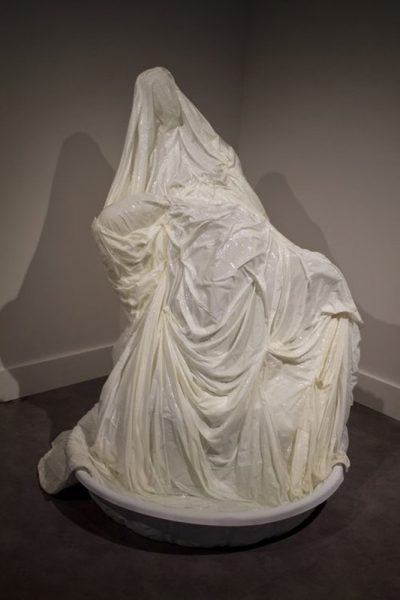 Lauren’s recent exhibit “Wrapped Up, Tied Up, Tangled Up” is a fascinating look at motherhood. It was Lauren’s first solo show since giving birth to her daughter, who is now almost 3. The show featured collages and a video installation as well as sculptures featuring umbilical cords and belly buttons. Lauren used a wide range of materials—including lycra fabric, cardboard, styrofoam, and fiberglass resin—in her artwork.

The exhibit’s title is a nod to a Sunday School song Lauren remembers from her childhood in Atlanta. A distorted version of the song is actually featured in the “otherworldly” video of her undulating pregnant belly in the exhibit. “This work has been brewing since before my daughter was born,” she says, “and this show felt like a tangible way to share my ideas.”

Lauren, an assistant professor of art at Samford University, moved to Birmingham from Iowa last summer with her husband Stephen Evans (also an artist and a part-time professor at UAB and Samford) and daughter Agnes.

With a husband who helps with preschool pickups and drop-offs and does much of the cooking, Lauren enjoys a good balance. She loves working with her students, and thanks to the structure of the school setting, she says, her artwork has flourished. She also loves her time with Agnes—the couple’s “hilarious, inquisitive, and spunky” almost-3-year-old. 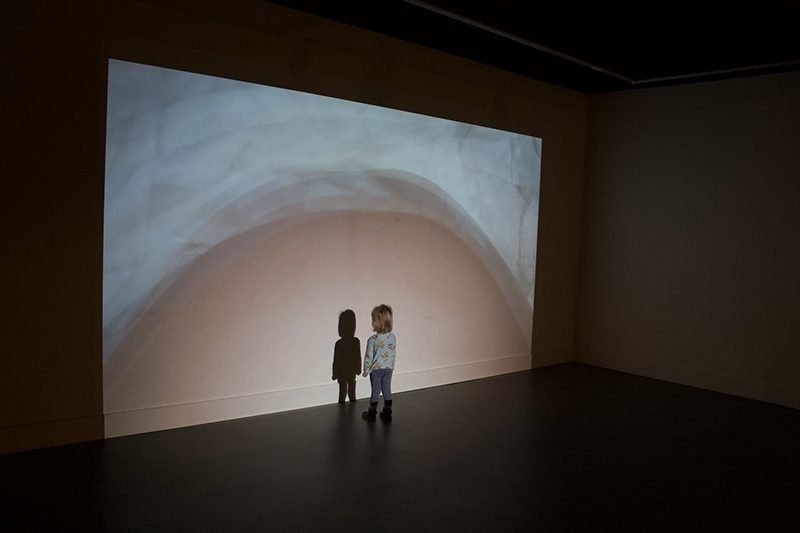 The little girl identifies with her mom’s work, Lauren says, and recognizes she’s part of it. Upon seeing the banner outside the art gallery, which featured an image of Lauren’s pregnant belly, Agnes would squeal, “That’s me in there!”

For Lauren, motherhood is both a passion and an inspiration. After ordering herself a piece of jewelry made from breastmilk, she decided to dabble with creating art using her freezer stash. (It’s not easy, she admits.) She’s also trying to decide how to use her placenta, which remains in the freezer. She made her daughter Agnes a soft sculpture of an umbilical cord that she keeps tucked in bed with her.

Growing up, Lauren made good grades and, though she loved art, she decided she should study business. “You’ll end up majoring in art,” her high school sculpture teacher told her. The prediction was half true: Lauren double-majored in business administration and studio art.

During college, Lauren considered all her options: Go into fashion design? Try cosmetology school and open a hair salon? She knew she needed a creative outlet. During her junior year, a professor suggested graduate school, and Lauren went on to earn an MFA. Upon graduation, she was eager to teach. However, in the competitive academic job market, she wasn’t sure what she would do if she couldn’t find work: Babysit? Work at a clothing store?

And then it happened: She accepted she was meant to be an artist. “Deep down, looking back, maybe I always knew,” Lauren says. “I just didn’t see it as an option for a career back then.” She loves teaching and also loves the fact that her career in higher education actually fosters her work as an artist.

While Lauren was a bit nervous about launching the progressive motherhood-related exhibit she found the positive responses she received heartening. “I think the show was a good vehicle for discussing these things,” Lauren says. “I’m really grateful.”