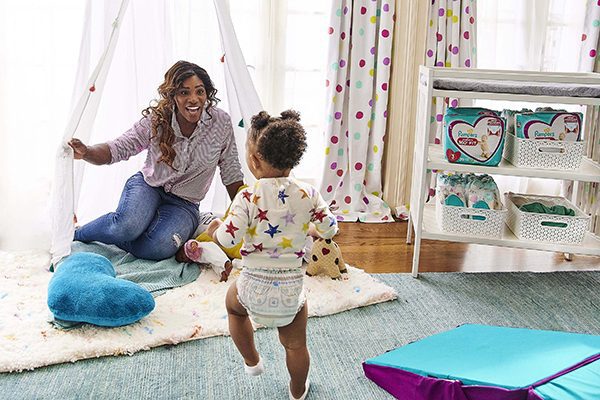 We dare you to tell us one thing cuter than babies dancing in their diapers.

You can’t. Because there’s nothing cuter.

They’re inviting parents everywhere to share adorable videos of their babies’ awesome dance moves. In return, parents get a chance to win a year’s supply of Pampers Cruisers diapers as well as being featured on Pampers’ social media channels.

Want to enter? Just access the “Pampers Wild Child Wiggle” song on Spotify or another platform and get your baby dancing.

Then upload the video with the hashtags #WildChildWiggle and #Sweepstakes. (First, check out the official rules here.)

We love daily dance parties in our house and we’ve got a new song on repeat – the Pampers Wild Child Wiggle! Now I want to see YOU wiggle! Post a video of your baby dancing in their #Cruisers360 diaper using #WildChildWiggle and #Sweepstakes for a chance to be entered to win a free year supply of diapers and be featured on @PampersUS. #PampersPartner @ShaunT I know you’ve got some moves – let’s see those babies wiggle! Video credit: @tiffanydarlyn, @asekyb, and @lauraiz For official rules visit: https://bit.ly/2sTUqHV

And if you’re curious about the back story here, we’ve got the scoop. Apparently some (ahem) lovely people have been known to refer to any wiggly, active baby (like Serena’s daughter Olympia) a “wild child.”

Instead of being annoyed, Serena is owning it.

“My daughter Olympia has always been very active—she skipped crawling and went straight to walking, and I’ve been trying to keep up with her ever since,” Williams was quoted as saying in MediaPost. “Sometimes when we’re in public she will be running around, climbing over things, and I’ve definitely heard her being called ‘wild’ in a negative way. But in my opinion, being a wild child is a good thing—it means she’s spirited and curious, and active.”

And being a forward-thinking company, Pampers is all over it. The company launched Cruisers 360 Fit diapers, with a no-tape design and stretchy waistband, to suit those wiggly “wild child” babies.

So what are you waiting for? Share a video, and get a chance to win a year’s supply of those diapers!