After Joe Biden and Kamala Harris declared victory in the 2020 presidential election, Staci Brown Brooks knew she had to make Inauguration Day special for her 2-year-old daughter, Charlotte, whom she lovingly calls “Sweet.”

Vice President Kamala Harris is the first woman, the first Black person, the first daughter of an immigrant, and the first South Asian American to be elected to the position. For Staci, this was a reason to celebrate.

“I decided after the election that Inauguration Day would be a day that Charlotte would stay home with me and we would experience that moment together as a Black mother and as a Black daughter,” she says. “While she’ll have no memory of it once she’s older, I will remember it always. Watching Vice President Harris be sworn in with me holding Charlotte in my arms to witness that moment — that was special to me.” 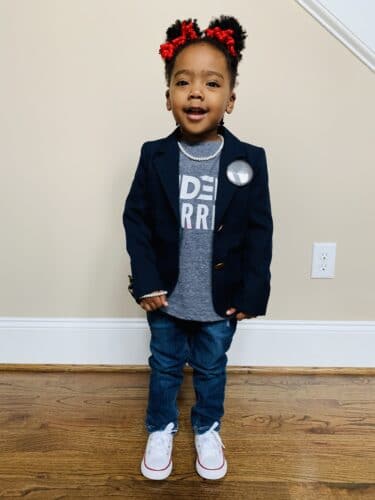 The day was filled with red, white and blue snacks and patriotic décor. Charlotte was dressed in jeans, a Biden Harris t-shirt, a blazer, sneakers, and pearls.

This is just one example of the many experiences Staci tries to create for her daughter and she does it all with one goal in mind — making sure Charlotte feels safe, special and loved. 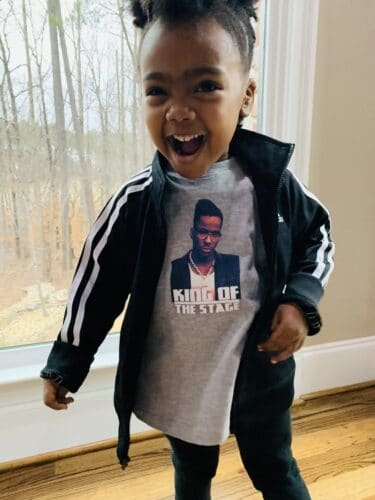 Being a Black girl isn’t easy, so raising a Black girl isn’t either.  A report from the Georgetown Law Center on Poverty and Inequality found that people think young Black girls, compared with young white girls, need less nurturing, protection, support and comfort. They’re seen as more independent, and participants in the study thought Black girls know more about mature topics, such as sex. Furthermore, because girls of color are seen as less childlike, they are more likely to be criminalized.  And an estimated 64,000-75,000 Black women and girls are currently missing in the U.S.

“I came to parenting with far more joy than fear in 2018 when she arrived,” Staci says. “It was and is still for me a joyful time.”

And Staci and her husband Gerald do all that they can to fill Charlotte’s life with Black girl joy. Last summer Staci and Gerald transformed their backyard into a mini water park with a blow-up pool and sprinkler toys. “She loves playing in water,” Staci says of Charlotte.

For Charlotte’s first birthday Staci and Gerald had a ladybug-themed picnic in their garage, complete with AstroTurf, picnic tables, and giant ladybug balloons. For Halloween Charlotte always has more than one costume. Friday night is for “Girls’ Night.” Donned in fancy pajamas, Staci and Charlotte eat chips, sip juice, and watch a movie of Charlotte’s choice. Saturday morning is for playground trips with Daddy. And Sunday mornings are for blueberry pancakes.

“She loves to help me mix anything in the kitchen,” Staci says. 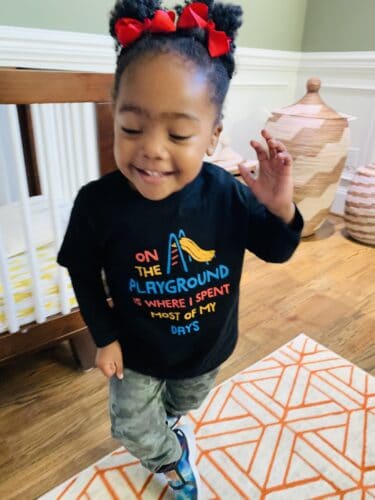 Charlotte is usually rocking an outfit that adults wouldn’t mind adding to their wardrobes. “We don’t really do girly, unicorns, rainbows,” Staci says. “I tend to dress Charlotte like I would want to dress if I were two-and-a-half and that typically means a lot of graphic tees.”

Charlotte has a Wu-Tang shirt, a Fresh Prince of Bel-Air tee, and a Bobby Brown shirt – just to name a few. She has plenty of tees celebrating Black History Month and Women’s History Month, too.

“T-shirts, puzzles and books are part of how we teach her our history and have fun with pop culture,” Staci says. “PuzzleHuddle.com is where we get some of her inspirational puzzles that feature children who look like her.

Staci usually pairs Charlotte’s graphic tees with shorts and jeans from the boys’ department. “The clothes in the girls’ section are too snug and glittery for my little active, athletic girl,” Staci says. But that doesn’t mean there’s no room for princess play. “We’re really into princess dress-up lately and we go all-in on that,” Staci says. Charlotte’s the Princess and the Frog nightgown is one of her favorites.

Staci takes lots of photos to document these special moments she creates for Charlotte. “Many of the things that I do I freely admit are special for me more so than her because she’ll have no memory of it,” Staci says, “but my hope is that one day she will look back at these pictures fondly and think ‘My mommy really tried.’”

As she raises her daughter, Staci follows the example set by her own mother.

“I had such a great template with my own mom, and I’m hoping I can replicate just a morsel of that for Charlotte,” Staci says, adding that becoming a parent has only deepened her love and appreciation for her mother and strengthened their relationship.

Staci’s father died when she was only 5 and her younger sister was 2. Though a young widow and single mom, Staci’s mother gave her girls a good life.

“She worked – sometimes up to 3 jobs — to make sure that we had ballet and never missed any field trips and always had spring and summer clothes,”

When Staci showed an interest in Paris and she couldn’t take her to France, she brought France to her by arranging for a foreign exchange student from France to stay at their home in Selma.

“My memories of childhood tend to be around the things that my mother did with me and for me and less about what she purchased for me,” Staci says. “Most of all it was about her just being present.”

Staci takes the time to prepare homecooked meals for her husband and daughter, but she wants Charlotte to know that her work is also important.

“I saw a working mother, so I am a working mother,” says Staci, who is director of communication for a major utility company. “The portrait of a working mother to me was key as I was growing up and it’s also a part of what I want Charlotte to see. I want her to know she can work hard and achieve and pursue her educational and career goals without limit.”

Parent with Your Heart 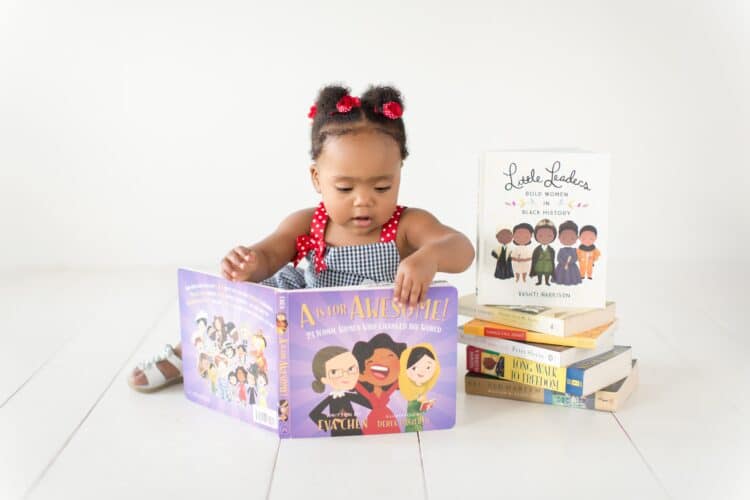 Like any parent, Staci still has moments when she struggles to get her daughter to go to sleep or eat her vegetables. She admits she sometimes texts strong women in her family asking them to tell her exactly what to do. They never do.

“But I think the beauty and the joy and the scary part of motherhood is that there are no instructions,” Staci says.  “We just had to figure it out, and we did — which still amazes me.”

While Staci enjoys creating special moments for her daughter, she says it doesn’t take a grand production to love a child.

“Even if I didn’t do the cheesy Inauguration Day party or Halloween parties or buy Charlotte silly t-shirts she would still think that I hung the moon,” she says. “Little kids don’t need nearly as much as we might think they do. Just start with the spirit of ‘I want you to feel safe, special and loved.’”

And Staci believes every parent can do this for their child.

“You parent with your heart whether you had that example or not, it is within you,” she says. “Once you have a little human to take care of and nurture and raise, things awaken within you that you didn’t realize were there.”