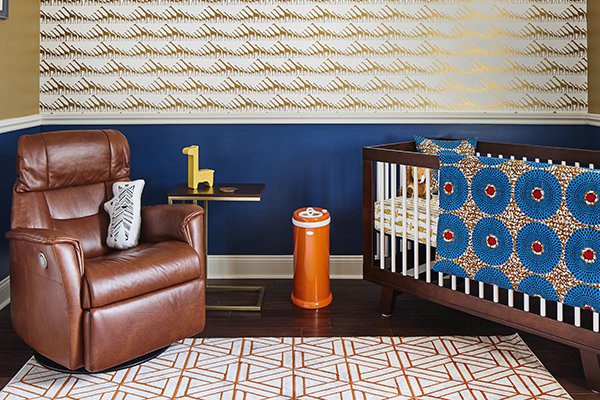 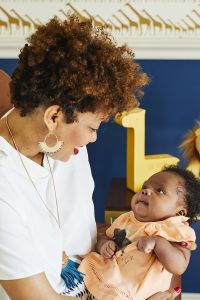 Safari Style.  A couple designs a sophisticated baby nursery to welcome their firstborn.

When Staci Brooks discovered she was pregnant with her first child, a baby girl, she was excited to plan the nursery. Eschewing the traditional pinks and princess-y elements, Brooks set out to design a bright, non-traditional space that would go from nursery to big kid room with ease. Inspired by a giraffe-shaped bookcase she found at Crate & Kids, Brooks settled on an African safari theme. “Once I found the giraffe bookcase, that became the muse for the entire room,” Brooks says. “That bookcase was the first item we purchased for the nursery. I love books and hope to pass that love on to Charli.”

Charlotte Grace Brooks, called Charli for short, was born on July 31, 2018, as the first child to Staci and her husband Gerald. She was also the first grandchild and niece for the large extended family, “so everyone was very excited for her to arrive,” Brooks says. In preparation, the Brooks’ large extended families and friends hosted a co-ed baby shower to make sure Charli had everything she needed. The shower theme mirrored the nursery safari theme, and 120 people came to eat, play, and celebrate Charli’s arrival.

“It was the hostess’ idea for the shower theme to mirror the nursery, and we loved it,” Brooks says. “My sister, Jaclyn, is a veteran educator and is very creative so once she had a theme she started crafting away.”

Many gifts received were specifically for the nursery, and everyone who attended the shower signed an “Adventure Awaits” message mat that hangs in Charli’s nursery over the giraffe bookcase. 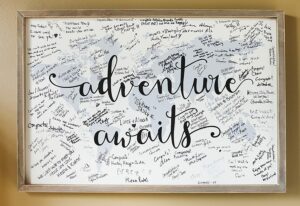 An underused guest bedroom was transformed into a sophisticated nursery space. Hardwood floors replaced carpet, and the walls received a two-tone paint treatment with Sherwin Williams paint in Baguette and Regatta. A chair rail was added for definition. Brooks also created a focal wall with metallic wallpaper featuring an abstract giraffe print. “I knew I wanted an accent wall,” Brooks says. “I’m such a fan of wallpaper, but beautiful, modern wallpaper is not easy to find.” She found the Sissy + Marley giraffe wallpaper from ducduc, a New York-based children’s furnishings store. 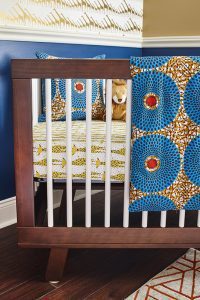 Brooks selected the mid-century-style crib and changing table for their graphic contrasting espresso and white color and versatility (the crib will convert to a toddler bed when Charli grows out of the crib). Brooks found West African fabric on Etsy and had a local seamstress make a duvet cover and pillow. The rest of the bedding—in zebra and giraffe patterns—came from Crate & Kids. “Nothing about the room is ‘babyish,’ so we hope she will continue to enjoy it as she grows,” Brooks says.

Finishing touches included a comfy leather recliner, a wooden bead chandelier, African baskets for toy storage, and a modern area rug in an orange geometric print. “We incorporated as many authentic touches from African countries as we could,” Brooks says. “In addition to the crib bedding, the baskets are from World Market and were handmade by the Wolof tribe in Senegal. I’m on the lookout now for a tribal wall hanging to add.”

“All the elements of the nursery were chosen with intention and love, just for our baby girl,” Brooks says. “Charlotte is a happy girl. She’s so playful and alert. We read her a book every day from her library that our family and friends stocked for her. We are very blessed parents.” 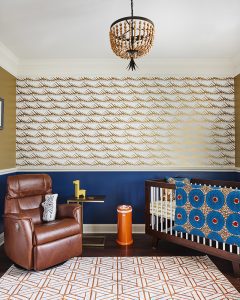 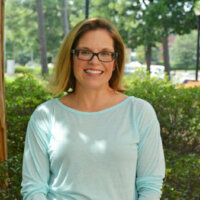