Kate Bridges 01/01/2021
0 Comments
As a little girl, I dreamed of marrying Prince Charming, having children, and living happily ever after. My dream eventually came true, but due to infertility, having a child was a six-year journey.
I married my Prince Charming right after college. We both wanted to immediately have children but quickly realized that would not be easy for me. We decided to seek professional advice. I knew I had gynecological issues, but not what they were. A visit to my gynecologist revealed I had polycystic ovary syndrome (PCOS). The doctor started me on an oral medication and said to call her when my period started. Sounds easy enough, right? Not for me. At 22, I’d only had my period a handful of times since age 10. I waited for three months, but no period came.

Our next step was to go to a fertility doctor to see if we could get more answers. During our consultation, the doctor told me that due to my young age (and short time being married) we should wait until I was older and had tried naturally for longer. I was devastated. Why would it matter that I was young when I knew there were infertility issues? I asked him to reconsider since I had a history of PCOS and a lack of periods and he agreed to do a thorough exam, bloodwork, and ultrasounds. Through those tests, we found out not only did I have PCOS, but I also had a thyroid issue, Hashimoto disease, anovulation, insulin resistance, and a left ovary that worked 80 percent less than my right ovary. My husband’s labs all came back normal. The doctor accepted me as a patient, and we got to work on a solution. The first thing we did was a three-hour glucose test. Any of you moms who failed the one-hour test while pregnant knows what a joy it is to do a three-hour test! I was put on a diabetes medicine and sent to a nutritionist. After about two weeks on a new diet (eating 1000 calories a day) and the medicine, I lost all my energy. When I told the doctor, he said to stop the medicine, forget the diet, and make an appointment for more labs. And that’s what we did for months — labs, ultrasounds, and more labs. I was losing my patience and getting nowhere. Then, things changed. 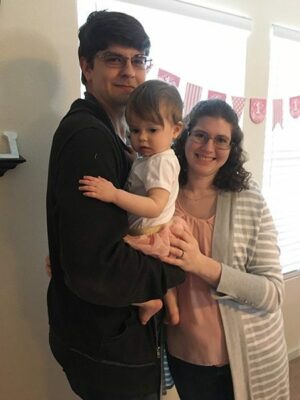 I had a job offer to transfer from New Jersey to Alabama for a better position and higher salary. This meant we would only be one state away from my husband’s family, so we accepted the offer and made our way down South. Two months in, I sought out a new fertility doctor. This doctor reviewed my history and said that we would start easiest to hardest (i.e. least expensive infertility treatment to most expensive). We started with fertility medications but none of them worked.

Our next step was to try IUI (intrauterine insemination). This entailed giving myself subcutaneous injections in my stomach every day, with an extra trigger shot injection at a precise point before the IUI. The doctor wanted to try this procedure three times before moving on to in vitro fertilization (IVF). Unfortunately, after three attempts, I still did not become pregnant. My hopes were shattered each time I got the call saying it didn’t work.

Next, we started the process for IVF. My doctor did an ultrasound and found there was a fibroid blocking the entry from one of my tubes to my uterus. I had to have surgery to remove the fibroid that next week and then heal for a month. After that, it was time to start the process for egg retrieval.

We drove to Nashville where the retrieval procedure would take place. The recovery from the surgery was tough — my abdomen was so swollen that it hurt to walk or laugh. I couldn’t even get into our bed, so I spent the weekend on the couch propped up with pillows. In the end, the pain was worth it, since we were able to get 28 eggs (the highest of everyone that day) and make five beautiful, chromosomally perfect embryos (four girls and one boy)! We were so excited for the next month when we would transfer one of those embryos and hopefully get pregnant.

It was November 30th, 2017, when we transferred our first embryo (a girl) in that Nashville clinic. I remember being so excited because this had to work — they were putting the baby right where she needed to be. I spent the next 10 days anxiously waiting to go for my blood test to determine if I was pregnant. On December 8th, I went in so sure that I was pregnant. I got the call later that day that we had lost the baby. After I got off the phone, I screamed outside the door of what would have been the nursery. I called my husband and he rushed home. Together, we cried. We mourned. We named her Carrie Love.

At the beginning of January, we were ready for the next transfer. My doctor wanted to run an endometrial receptivity test (ERA) that he hadn’t before. He said around 5 percent of women have a different transfer day than day five of their cycle. For a transfer to work we needed to be sure, so he ran the test. Turns out that on top of all the other issues, I also am one of the 5 percent who has a transfer day on day six instead of day five. I thought now that we knew why the first one didn’t work, the next one should. On February 9, we did our second transfer (another girl) and waited another 10 days. On February 19, I got the call that again it hadn’t worked and the baby was gone. We cried. We mourned. We named her Zoey Hope.

After a few months’ break and another fibroid removal, we started to gear up for a third transfer in June 2018. We pulled out all the stops. I had weekly massages, weekly acupuncture appointments, and we also used injectable progesterone. We redid the ERA to make sure I was still a day six transfer (I was), and everything looked good to go for this third transfer.

The day of the third transfer was June 26th, 2018. By now we were old pros at this process. Hopeful as always, I bought boxes of home pregnancy tests so I could maybe get a sneak preview of a positive before the official day 10 test on July 6th. It was Saturday, June 30th when I woke up and went to the bathroom to take what seemed to be my 1000th pregnancy test. This time was different — I saw a faint pink line appearing in the little window. Could it be? I showed my husband and in his sleepy state, he told me not to get my hopes up. After all, how many times had I thought I was pregnant when I wasn’t? Each morning I would take another test and that faint pink line got darker and clearer. On July 6th, I went for the blood test and got my official positive. I was finally pregnant!

The next nine months were full of ups and downs. I spent every day dealing with morning sickness, was hospitalized three times for nausea and bleeding, and went on maternity leave at 17 weeks pregnant. Toward the end of February, I developed preeclampsia and had several hospital visits due to low movement and unresponsive NSTs (nonstress tests). I was so scared that we would lose the baby after getting this far. The baby’s placenta was breaking down and she was measuring small. Due to my nausea, she wasn’t getting enough nutrients. Along with our doctor, we decided to induce, assuming that she could get better care on the outside than on the inside.

March 6th, 2019 was the joyous day our baby was born. After 10 hours of labor and 20 minutes of pushing, our little miracle arrived in the world! She was only 18 inches and 4 pounds 11 ounces, but she was here and she was healthy and that’s what mattered most. We smiled, we cried, we named her Kayla Elizabeth. 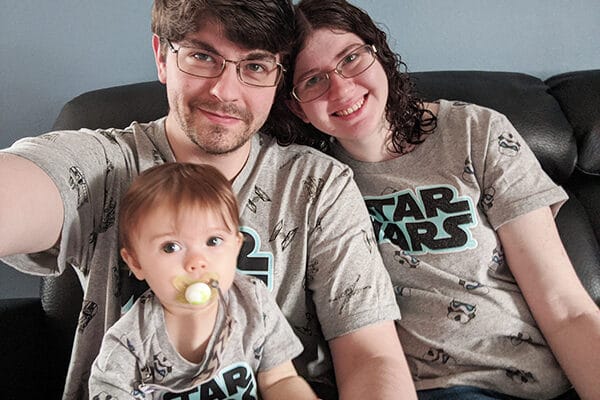 Over the next year, we learned how to be parents. I quit my job to be a stay-at-home mom, and we grew as a family. I loved every minute of it, but I wanted more. I had always dreamed of having multiple children. In January 2020, I went back to my fertility doctor to start the process for our next transfer. We still had two more embryos left, after all. Yet again, another fibroid was found. I had to have surgery and heal.

In April, everything was looking perfect, but there was one problem that none of us could have anticipated. COVID-19 was at its beginning and non-essential procedures (including IVF) were not allowed. On June 1st, we were finally able to do the transfer of the last female embryo. I figured at this point we knew what worked and by four or five days post transfer I should get a positive home test. Day four came and went without a positive test; as did days 5–10. On June 11th, I went for my blood test and got the call that the baby was gone. We cried. We mourned. We named her Abby Grace.

Not to be defeated, I told my doctor to set me up for our final transfer of the boy on July 10th. We didn’t have the emotional capacity to do six more years of treatments, so this was our last chance. Each day after the transfer passed without a positive home test result and on July 20th I got the official word that our last baby was gone. We cried. We mourned. We named him London Thomas.

This loss was especially difficult since it was our last opportunity to have another biological child. I cried for days and fell into depression. After six years, five surgical procedures, four failed IVFs, and roughly 1000 self-injections, we were finally done. Part of me felt relieved to not have to go through that emotional turmoil again. A bigger part felt so hurt that our dream of a large family was lost.

I only ever wanted to be a mom and while I was one to my beautiful Kayla, I’d always hoped for more. In some ways, we didn’t even deal with the emotions of losing the first two babies because it was an “eyes-on-the-prize” mentality instead of mourning the loss before trying again. It wasn’t until after we had Kayla that we realized what we were missing from the first two (and subsequently the last two). With the first two losses we didn’t have to look at what we lost. With the last two, I had to stare at exactly what I lost. I knew I had lost play times, smiles, and giggles. The realization that I would never have more babies and my daughter would never have a sibling was overwhelming for me. We still pray that one day we will have more children, whether through a natural miracle or adoption.

Each day we thank the Lord for the blessing that is our Kayla. I’ve learned through all of this to be content with the blessings I have and to remember that the Lord gives and takes away. I couldn’t be more thankful for His goodness and our little miracle, Kayla.

My Infertility Story: How I Finally Got My Miracle Baby After 6 Years

Please confirm you want to block this member.

You will no longer be able to:

Please note: This action will also remove this member from your connections and send a report to the site admin. Please allow a few minutes for this process to complete.