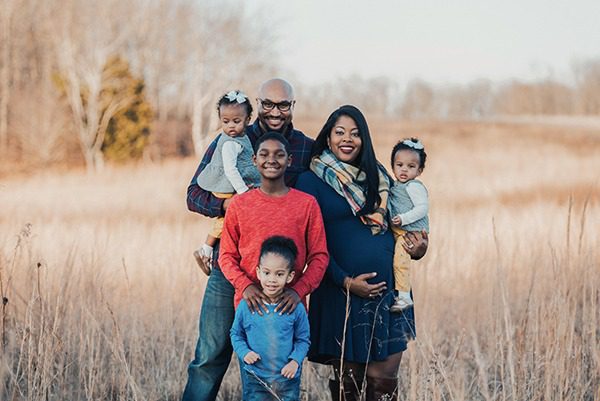 Jemia Roberson Storey is a Babypalooza super fan. The once-hopeful mom has attended every Babypalooza Baby & Maternity expo with the exception of one since 2014. Jemia always knew she wanted children. After marrying her husband Adrian, she became the proud bonus mom of Aiden (then 6, now 11). And she was so excited to add to their little family.

The couple decided to wait a year before trying to have a baby, but that didn’t stop her from taking Aiden on a little adventure to their first Babypalooza. “They said it’s for new, expectant, and hopeful parents,” Jemia says with a laugh. “Well, I was a hopeful!” And so the “Storey” begins. 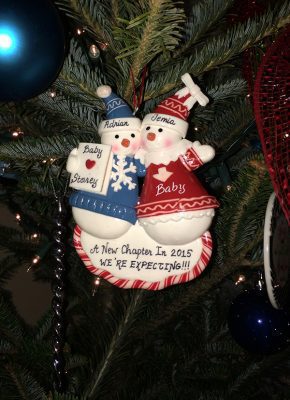 Jemia wanted to get pregnant as fast as possible and admits that she may have gone “a little crazy”; She tracked her basal temperature, used the Fertility Friend app, ate pineapple core, and used other ideas to get pregnant.

The first month was disappointing, but month two was successful: Jemia found out she was pregnant on December 22.

She managed to keep the news a secret for three days. On Christmas morning, she woke up extra early and told her husband Adrian to look for his first gift on the tree. He finally saw the snowman ornament that she had purchased declaring that she was expecting in 2015. “He was so excited!” Jemia recalls. Her pregnancy was uneventful and baby boy Hampton arrived August 31, one day before his due date. The Storeys were overjoyed.

When Hampton was around two years old, Jemia found out she had an ovarian torsion, which is a condition in which the ovary twists around ligaments, cutting off blood flow to the ovary and/or fallopian tube. She underwent emergency surgery and lost her right fallopian tube and her right ovary.

“I cried,” Jemia recalls. “We had always wanted more children. I prayed to God that my left side was still good.”

About a week after her surgery, Jemia went to a routine OB appointment. Jemia’s doctor knew the couple had a plan: They were eager to move closer to family and had hoped to postpone their next child until they were settled. But after seeing the scans and considering Jemia’s age (35), she advised them to change that plan. “You need to give your body some time to adjust,” she said,” and then go for it.” So they went for it.

Three weeks later, the couple found out Jemia was pregnant. They put a Big Brother shirt on Hampton and eagerly awaited their new family member.

At their first prenatal appointment, the couple looked up at the ultrasound screen and saw two dark spots. Adrian raised his eyebrows. Jemia screamed. (“My OB’s staff still teases me about that moment,” she says with a laugh.) She was absolutely shocked.

Twins. They were having fraternal twins.

The news was overwhelming, but they were excited. They found out they were having twins on Monday, and by Thursday they’d been gifted a double stroller and car seats. By August, they had everything they needed.

The baby girls were due late September, and Jemia carried them until 36 weeks and 6 days (38 weeks is full term for twins). Baby A (Lola) was head down, but Baby B (Langstyn) was breech, so Jemia was scheduled for a C-section. 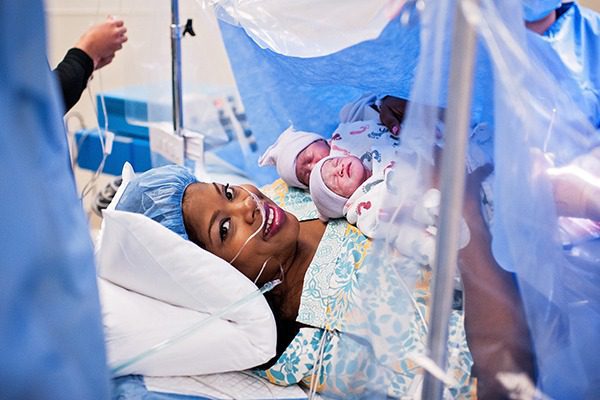 The C-section was more difficult than a vaginal birth. And the most difficult part was afterward when baby Lola was admitted to the NICU due to a low temperature.

Jemia was determined to feed her babies the way she wanted, and she told the NICU not to give Lola formula. She woke up every three hours, around the clock, and nursed Langstyn first. Then she made the long walk to the NICU, Boppy pillow in hand, to breastfeed Lola. It was exhausting, but Jemia kept it up for four days straight. “I was in a zone,” she says.

Lola was finally discharged, and then a nurse checked Langstyn’s temperature. It was low, and Langstyn was admitted to the NICU. In total, Jemia and the babies were in the hospital for 12 days. All Jemia wanted was to be home with her babies.

Once the family got home, life was good once again. Aside from a scary battle with RSV at 11 weeks old, the twins were happy and healthy babies.

And then in late June, a few months before the twins’ first birthday, Jemia was surprised when her period was late. She took a pregnancy test—and it was positive.

Jemia had a three-year-old and nine-month-old twins, and now she was pregnant again. “I had to sit down,” she remembers. “I truly wasn’t prepared to see those double lines on the pregnancy test—at least not this soon after having twins!” 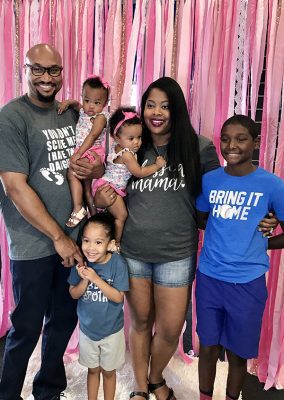 She went through a range of emotions: Would people judge? Would people say, “They just had twins and now they’re pregnant again?” Would it be “more shock than yay?” she wondered.

She waited longer than usual to make her pregnancy “Facebook official,” and she was heartened by the overall positive reaction. Ready or not, this baby arrives in February.

Jemia still wants to move closer to family. It’s hard raising young children without a village near. “I have very few breaks,” she says.

But on the plus side, she feels that leaning on herself and her husband has made their marriage stronger. “We have established a very strong foundation as a family,” she says.

Now 15 months old, Lola and Langstyn are, as Jemia says, “very busy.” Four-year-old Hampton is an old soul, who loves to please his parents, and he is thrilled to have little playmates. Aiden is so good with all three of his younger siblings. “We are truly blessed with our five children,” Jemia says.