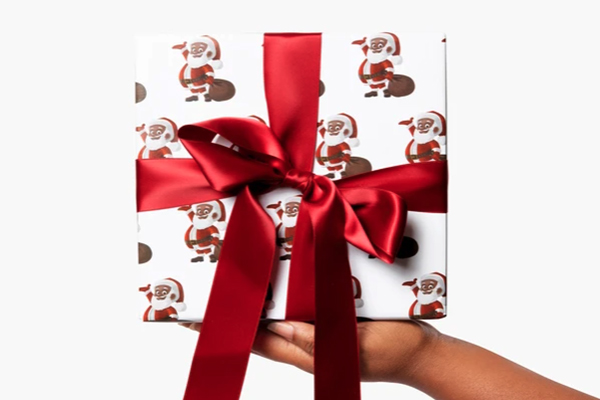 For Jacquelyn Rodgers, the Christmas season has always been a celebration of her heritage.

She has fond memories of her mother filling the house with the Black Santa figurines, Black angels, and other ornaments featuring Black characters. Even the nativity scene in their home featured faces that looked like family.

“When I had my son, I wanted to share those same memories with him,” Jacquelyn says, “But I noticed there was nothing like it in the store during the holidays.” So, Jacquelyn began creating the holiday accessories she couldn’t find and in 2016 she launched Greentop Gifts, which today offers holiday décor, gift wrap, stationery, and apparel that celebrate diversity.

In the beginning, Jacquelyn and her husband Shaun were shipping products out of their garage. Now Greentop Gifts can be found on Amazon and is sold by a few independent retailers, too. Greentop’s most beloved character is Clarence Claus, a Black Santa named for Jacquelyn’s father that’s featured on most of the company’s gift wrap and apparel.

“My kids and the kids of people who buy our products, when they see a Santa, they call it Clarence Claus,” Jacquelyn says. “It brings him to life and adds to the wonder of Christmas. We definitely want to continue to expand and grow Clarence and tell more of his story.”

For Jacquelyn, entrepreneurship is a family affair. The name “Greentop” is an homage to her grandfather who owned a restaurant of the same name in the 1940s in North Carolina.  “It was a place of celebration and community for my family and friends in our town,” says Jacquelyn, who grew up in North Carolina and now lives in Atlanta, Georgia.

Jacquelyn’s children, two-year-old Cameron and seven-year-old Elijah, are a part of the business, too. “They love helping me make promo videos and Reels,” she says. “They talk about the business to people we see. They tell people about new products that we have. They are our best sales reps.” Jacquelyn hopes that through the business, she and her husband are leading by example.

“There is a legacy of entrepreneurship,” she says. “We’re showing them entrepreneurship first-hand and letting them be a part of our journey. I think it’s important for kids to see that if they have an idea it can go from just a simple idea to something they can hold.”

For several years, Jacquelyn juggled marriage, motherhood, and Greentop Gifts with a 9 to 5. “I would work until 2:30 in the morning,” she says. “It wasn’t exhausting because it was something I was so passionate about.”

When they still lived in North Carolina, the kids’ grandparents would babysit while Jacquelyn and Shaun packed orders and went to trade shows. “We have a large village and community of people who help us,” she says.

In February of 2020, Jacquelyn quit her day job to run Greentop Gifts full-time. Then the COVID-19 pandemic. In spite of the pandemic 2020 was her most successful year. “There were conversations about the importance of Black-owned businesses and Black people in general and from that our business was put in a spotlight,” Jacquelyn says.

Jacquelyn and Greentop Gifts have been featured on NBC News, People Magazine, Essence Magazine, O, The Oprah Magazine and more. Jacquelyn wowed judges at a pitch competition sponsored by Target and was selected to be a part of Google’s Black Founders Fund.

The balancing act of being a mompreneur is tough, but one thing Jacquelyn doesn’t battle is mom guilt. “I got rid of that in 2020 by knowing that I can’t do everything for everybody and being OK with that,” she says.

Jacquelyn says she manages it all by knowing what balls to juggle and which balls to drop. Sometimes her family enjoys a homecooked meal that she prepped over the weekend. Some nights they eat Chick Fil-A.

“As long as we go to bed full and nobody’s bleeding, I mark it off as a good day,” Jacquelyn adds with a laugh. “Yeah, there’s a ton of laundry in our laundry room right now, but did we have a great day at a trade show? Did my kids go to school and are they happy and fed?”

For Greentop Gifts, business is booming, and Jacquelyn doesn’t plan to slow down anytime soon. She recently released products for birthday celebrations and baby showers. What began as a passion project for her own family is now helping families across the country celebrate the holidays with pride.