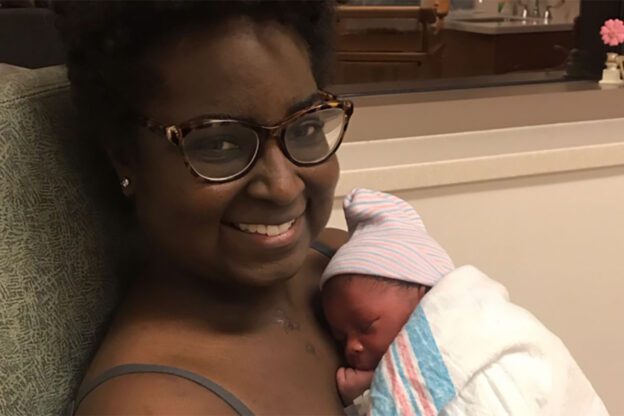 Gabrielle Davis had a plan.

She and her husband Antione were going to start a family three years into their marriage.

“But you know what happens with plans sometimes,” Gabrielle says.

Gabrielle has lupus, an auto-immune disease that causes inflammation in the body. Lupus can affect any part of the body including the skin, joints, brain, heart, liver, or kidneys. According to the Lupus Foundation of America, certain racial or ethnic groups — including people who are African American, Asian American, Hispanic/Latino, Native American, or Pacific Islander – are more likely to be affected by lupus. And 9 out of 10 people with lupus are women.

Because of complications with lupus, Gabrielle and her husband had trouble conceiving.

“There were countless blood draws and invasive tests, high-risk OBGYN appointments, doctors who flat our refused because of my kidney damage,” Gabrielle says. “ Finally, we understood that that route was closed to us because of the danger to me and our baby.”

In 2018 Gabrielle and Antione decided to pursue surrogacy.

“There’s not enough room to say what this disease has done to my life, but to put it simply and turned my world upside down,” Gabrielle says of lupus.

She describes lupus as a dance you never learn. You can take your medication and do all the things your doctors tell you to do and still get sick and even have to be hospitalized.

“When lupus attacked my reproductive system, it was a major blow to me. I felt like I couldn’t perform the most basic function of a woman – have a child,” Gabrielle says.

She says she had to do a lot of work mentally, spiritually, and emotionally to overcome this mindset and to enjoy the surrogacy process.

Gabrielle and Antione couldn’t afford to work with an agency but fortunately, a family friend volunteered to be their surrogate.

But the journey was just beginning.

“The months leading up to the birth were joyous, nerve-racking, and emotional,” Gabrielle says. “I was excited to meet my son, but I battled a lot of negative thoughts, too.”

She worried that her bond with her son wouldn’t be as authentic because she didn’t carry him. She worried about how he would react in the future when he learned his birth story.

“To overcome that, I talked with my therapist, kept open communication with my husband, and made sure that I declared over and over that he was my son,” Gabrielle says. “I still am a little anxious about sharing his birth story with him but it’s so special and I pray he feels chosen and wanted when I share it with him. We wanted him and we have the receipts to prove it.”

Along with her therapist, Gabrielle says her husband Antione helped her overcome these negative thoughts.

“He reminded me constantly that I was AJ’s mother and kept me in a good headspace,” she says. “My close girlfriends, my husband, my therapist were hands down my support system. And both our families were involved in getting us ready for AJ and I’m grateful for them.”

Antione Davis, Jr., or AJ, was born on September 24, 2019, in Tampa, Florida. AJ came into the world two weeks before his due date.

“Just like his early arrival, his birth was scary and exciting,” Gabrielle says. “The doctors saw that the umbilical cord was trying to come out first, which could really harm the baby. So, they had to rush my surrogate to the ER and do a C-section. He was born 10 minutes later.”

Gabrielle describes her first 24 hours with her son as both surreal and exhausting.

“I had a 6-pound miracle in my arms,” she says. And she was tired. But she didn’t want to let him go.

“I just remember honestly wanting to be selfish and keep him to ourselves, but I knew I had to share him with family,” she says with a laugh.

“When you see the interaction between us, there’s no question,” she says. “His smile every day when he sees me or I walk in the room killed those thoughts. I’m so grateful for our bond.”

“Embrace Your Role as a Mother” 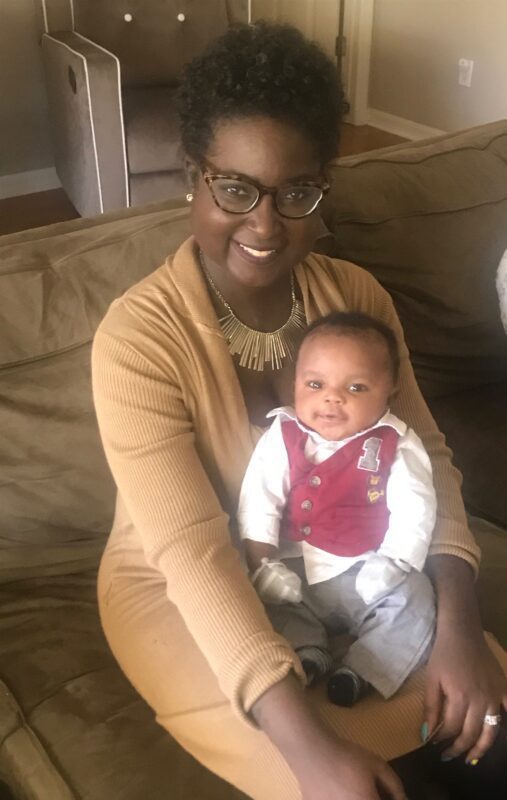 Gabrielle’s advice to women considering surrogacy is simple: “Get yourself ready emotionally, mentally and spiritually to embrace your role as a mother,” she says.

Gabrielle explains that in the surrogacy world, women like herself are sometimes called “intended mother.”

“You can imagine how demeaning that can feel,” she says. “Moms of surrogate must go through their own process to shut down that name and step into motherhood. For me, that looked like working with a therapist, being vulnerable to what I was feeling, and doing what I could as he was developing.”

Gabrielle also wants to dispel the myth that surrogacy is only for “white, rich people.”

“I can understand how some come to that conclusion, but I’m hoping couples like my husband and I chip away at that stereotype,” she says. “I’m hoping that by telling my story, those who can’t conceive the traditional route consider surrogacy. Yes, it is expensive. But we save for houses and other things we want – why not save to start a family?”