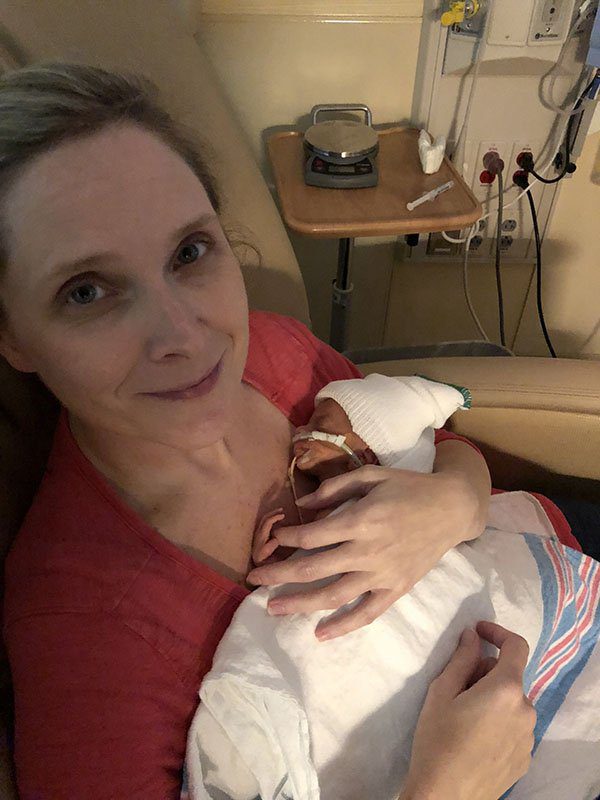 Excited. Slightly overwhelmed. Cautiously optimistic. Those were Julie Taylor’s emotions when she and her husband, Craig, found out they were expecting a baby. In the past, the Taylors struggled with infertility and opted for adoption as the path to becoming parents. They adopted their daughter Cady Riley, now age 5. “I asked God to take away the desire for another child if that wasn’t in His plan,” Julie recalls. “For a few years it wasn’t, and then the desire came back and I knew I wanted one more chance to have a baby.”

This was Julie’s first time being pregnant. Regardless of any potential complications she knew might arise, her overwhelming feeling was one of peace and gratefulness for this blessing from God.

When Julie was around 24 weeks pregnant, her blood pressure began to rise. Julie, who happens to be an OBGYN at the Women’s Center at Brookwood Medical Center, knew that this time also coincided with a baby’s ability to survive outside the womb—however, she also knew the health issues for babies born this early.

“I’m not an anxious person, but I did start to worry a bit,” Julie recalls. “My doctor (and my friend who went to residency with me) was very reassuring, and I trusted her completely. Not only was she watching out for me, but all of my partners were keeping an eye on me [while] praying for me and my family. This was such a comforting force.”

Julie kept in mind that every day she could stay pregnant meant one fewer day her baby would be in the NICU. However, she was exhausted, and her swelling began to worsen. Knowing she had a maternity leave coming up she kept working. She figured she was just tired from her busy life as a mom of a vivacious 5-year-old, and a wife, and a full-time doctor.

Finally, her diagnosis was official. She had preeclampsia, and it was clearly taking a toll on her body.

“One day at a time.” That’s how Julie tackled life with preeclampsia. She started with the basics: Is the baby moving? She checked to ensure her blood pressure was stable once the answer was yes.

As an OBGYN, she’d advised plenty of patients in the same situation; however, she says, “It was different when I had to take my own advice! Very humbling.” As her pregnancy continued, Julie started working half days because her blood pressure was rising—even with medication.

She went for an ultrasound on her first half-day and the doctor told her she was struggling to get good blood flow through the umbilical cord. Dr. Autumn said, “You know you need to be admitted.” “I know,” Julie replied. She was 31 weeks pregnant.

The Arrival Of Baby Winston

That night in the hospital, Julie prayed. Julie prayed for her baby’s safety, for his little lungs, for her own safety, and for the safety of her husband and daughter. She relished every moment and every movement because she knew pregnancy was drawing to an end. She was scheduled for a C-section the following day.

It was a difficult night. The next day at 1 p.m. baby Winston entered the world. Julie’s partners prayed for her before and after the procedure. Winston weighed 2 pounds 6 ounces. Julie and Craig were shocked at how tiny their baby boy was, but they agreed his first cries were the sweetest sound in the world.

“My c-section was smooth, the staff was my friends, and the nurses were comforting and kind,” Julie says. “I can’t imagine delivering anywhere else but at my home hospital. They were fantastic.”

Winston was here, but the Taylors’ journey was just beginning. Their time in the NICU at the Women’s Center at Brookwood Medical Center, Julie says, was “scary and humbling.” Julie soaked up the knowledge and leaned on the neonatologists for support. Hit vital signs are OK became her mantra. “The NICU was my safe place,” she says. “They took such good care of us.”

At one point, Winston developed an infection in his leg from an IV line that required a visit to Children’s of Alabama.

It was nerve-racking to leave their home hospital for a less familiar facility, but Julie was grateful when she realized the nurse at Children’s was actually one of her patients. “I almost cried when I recognized her,” Julie says. She also saw a Brookwood nurse-practitioner at Children’s who was already familiar with Winston’s care.

When they returned to Brookwood, Winston continued to grow stronger and bigger and less dependent on tubes every single day. “It was a miracle to watch,” Julie says.

To preserve some of her maternity leave to spend at home with Winston, Julie went back to work. She spent the evenings with Craig and Cady Riley, and she spent early mornings, lunchtime, and any other spare moments with baby Winston.

A Song With Special Meaning

Though the NICU can be a scary place for some families, the Taylors took the experience in stride. Being surrounded by people who loved them helped. “Some of my senior partners prayed over Winston in the NICU daily,” Julie recalls. “We were surrounded by prayer. My family and friends were amazing, from calls to texts. We never once felt we were alone in all of this.”

The song “Jesus, You Alone” took on a special meaning for the Taylor family. Julie and Craig sang it while they prayed over Winston both at Brookwood and at Children’s. Julie also played the song the first time she held her baby boy. “It was so comforting to know that the Lord was with us and in total control,” Julie says. “This has continued to be a special song, and I think of God’s faithfulness and what a miracle Winston is every time I hear it.”

And then it was time to bring Winston home. The feeling, Julie says, “was like a big sigh of relief. Like such a big weight was lifted off us.” Cady Riley was thrilled to have her baby brother and her mommy and daddy home as a family. The four settled into normal family life.

Winston is now a happy 1-year-old who crawls and cruises everywhere. He and Cady Riley have a sweet sibling relationship, and their parents love watching their bond strengthen.

“He’s a happy baby, and for all the time he spent in the NICU, you can’t tell he was a preemie!” Julie says. He’s had follow-up appointments and passed all his visits with flying colors. He does wear a helmet due to a flat area of his head from the long NICU stay, but it’s temporary.

Julie and Craig are so grateful for the health of baby Winston. “I know that not every mom gets a truly healthy baby,” Julie says. “I know that pregnancy is easy for some and hard for others. But God is faithful and hopefully, through our journey, someone else has hope and comfort from someone who faced the same struggle.”

Another silver lining? Julie realized early on that her experience with preeclampsia would make her a better doctor. “I knew that God was allowing some of these experiences,” she says, “so that I could hopefully be able to bless someone else that was going through something similar.”

A preeclampsia diagnosis, early delivery, and 63-day NICU stay is a lot for anyone to handle. OBGYN and mom Julie Taylor offers advice for overcoming adversity like this.

1. Find the right doctor. It’s so important to have a doctor you trust, Julie says. “I knew that we were being well taken care of and trusted my doctor with the care of my precious son,” she says.

2. Reach out to others in similar situations. According to Julie, 10 percent of all babies are born early—which means you’re not alone. “So many people have gone through something similar,” she says. Talk to people, and reach out and ask for help. A friend of a friend who’s traveled a similar path can bea true comfort.

3. Surround yourself with a supportive community. “My sense of community was widened when I realized how many people supported and prayed for us in the hospital,” Julie says. “I still now, a year later, have people ask me in the hospital ‘How is your little boy?’ My husband and I couldn’t have made it through without them.”

Preeclampsia is a serious condition that can occur after 20 weeks of pregnancy. A pregnant woman with normal blood pressure can suddenly experience pregnancy-related complications marked by high blood pressure and indications of damage to organs such as the liver and kidneys. A diagnosis of preeclampsia can be frightening, but if untreated, it can also lead to serious complications—or even death—for mother and baby. Doctors agree that the best treatment is a quick delivery of the baby. It can take some time for the mother to recover after the baby has been delivered.

What Are The Symptoms?

Preeclampsia can exhibit differently; some women experience no symptoms, while others do. One of the noted markers is a change in blood pressure. High blood pressure may develop slowly or rapidly. This is why prenatal care and monitoring a mother’s blood pressure is important. Always attend your prenatal office visits, so your health care provider can maintain accurate blood pressure records.

You should immediately contact your physician or go to an emergency room if you experience any of the following symptoms:

Here are some of the other signs and symptoms of preeclampsia:

*Remember, it is important to contact your doctor if you are unsure about a symptom you are experiencing.

What Are The Causes?

The specific cause of preeclampsia involves several factors, all of which involve the placenta. A woman with preeclampsia has a placenta in which the blood vessels have developed abnormally, causing them to function incorrectly. The blood vessels are narrower than normal, and hormone signals affect them differently, which limits the amount of blood flow.

Experts believe that the development of abnormal blood vessels may be attributed to any of the following: