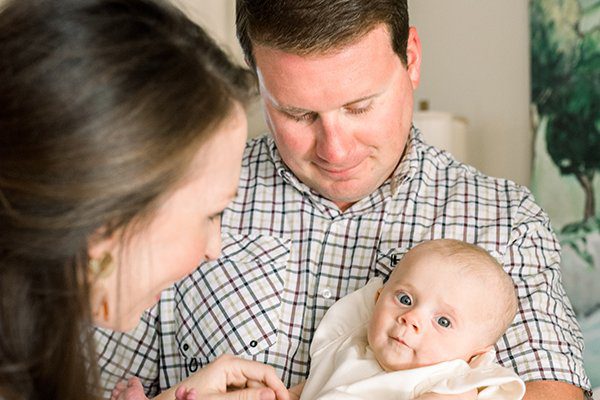 October 16, 2016, should have been the best day of Mark and Laura McCarty’s lives. After a typical pregnancy, they welcomed their much-awaited baby girl Sullivan. However, Sullivan was born ill, and the couple only had a short time with her before they had to say goodbye. “It was the most beautiful and most horrible day of our lives,” Laura says. But as you’ll soon understand, Sullivan’s legacy lives on in so many ways.

Laura and Mark met when she was a freshman at Auburn and he was a senior in high school. Though they were just acquaintances, six years later they reconnected at a friend’s wedding and fell in love. “It was on just our third date when we knew we were going to get married,” Laura recalls. “In fact, we dated, got engaged and were married all within a year’s time!”

The couple had been married almost three years when they began trying to conceive. Almost immediately, in February 2016, they had a positive pregnancy test. “I couldn’t believe we had gotten pregnant so quickly,” Laura says. “I have a lot of friends who have struggled to get pregnant for many months—years, in fact. It seemed surreal that it happened so fast. What an incredible blessing that I don’t take lightly.”

Laura’s pregnancy was easy and uneventful. In the first few months, she encountered some nausea. But soon it subsided, she got her energy back, and she felt “amazing.” The couple couldn’t wait to meet baby Sullivan—whom they called Sulley for short.

A Hello … and a Goodbye

Two weeks before the due date, Laura went into labor in the middle of the night. “I wasn’t sure at first if it was real labor,” Laura remembers. “For hours, I thought it was just gas pain!”

The couple went to the hospital and learned that the labor was, in fact, real. Laura had been terrified of labor but, she says, “Labor wasn’t nearly as scary as I thought it would be.” She recalls being “overwhelmed with incredible peace” as she prepared to give birth. “I just knew that I could do it,” she says, “and that it wasn’t something I should fear.”

After 12 hours of labor, the doctor told the McCarty family it was go time. Baby Sullivan arrived after just a few pushes. However, nothing went as they’d expected. “Immediately when she came out, we knew something was wrong,” Laura says. “Her coloring was off, and her belly was distended. Immediately our room was filled with nurses to help her. We had a little time with her before they whisked her off to the NICU.” Before Sullivan left the room, her loving parents heard her cry. They cuddled her. She looked deeply into their eyes.

“No one knew that Sulley was sick until she came out,” Laura recalls. “There were never any signs or complications during my pregnancy or delivery. The doctors made it very clear to us that she was very sick and they didn’t have any clue why.” Laura still tears up when she thinks about that beautiful and horrible day. “Our greatest joy was born,” she says, “and we had no clue that we would lose her that very same day.”

For the new parents, their time with Sulley was far too short. Though doctors worked to save her, her body was “too weak and sick” to accept two full-body blood transfusions. The medical staff couldn’t do anything to save their precious girl. “We were with her as she took her first and final breaths this side of heaven,” Laura says. “I’ll never understand why we didn’t get to have more time with her this side of heaven, but I’m so thankful for the time that we did have with our girl.”

Anger. Sadness. Bitterness. Regret. “You name it, we’ve felt it,” Laura says when describing their feelings after losing their daughter. “The first few months after losing Sullivan were nothing short of horrific,” she recalls. “We were truly living in a nightmare. We couldn’t believe what happened to us.”

However, rather than drawing away from each other, Laura and Mark became even closer. They leaned heavily on each other during the first weeks and months of grieving. “After you lose a child, I don’t think you’re ever truly the same,” Laura says. “It is something I wish no one would ever have to experience.”

In the months following Sullivan’s death, the couple got answers. After months of research and testing, doctors told them that they’d lost Sullivan to cancer. “She had an incredibly rare form of cancer—so rare, in fact, that they have never seen it,” Laura says. “Her case went to the national pediatric convention in 2018.”

After the rollercoaster of emotions had begun to subside, Laura and Mark focused on how grateful they were for their short time with their wonderful little girl. “At the end of the day, we believe that the Lord gave us Sulley as a perfect gift,” Laura says. “Her life and her death changed us. We are better people because of Sullivan.” 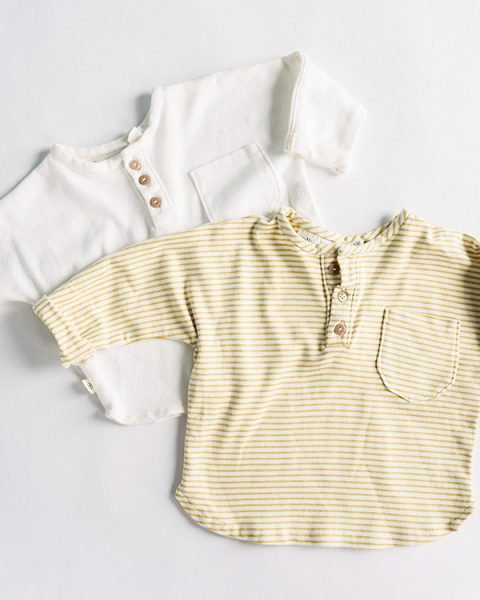 As clothing lines go, Sullivan Yates is unique. The company focuses on producing clothes that are fun and comfortable—“meant to be played in and made for adventure,” Laura says. “We focus on the joy and incredible blessing that our babies are to us,” Laura says. “Sullivan Yates embraces the messy, beautifully chaotic days of childhood.”

Laura works closely with her seamstress, Julia, to produce unique designs. My inspiration comes from lots of classic pieces,” Laura says. “My fabric helps modernize each design.” Customers rave about the comfy and well-made clothes featuring fun colors and prints. “Our pieces are classic with a twist—timeless,” Laura says. In fact, thanks to the overwhelming response, the company will soon begin small-batch manufacturing.

To honor their daughter and company’s namesake, Sullivan Yates donates a percentage of their proceeds to St. Jude’s. “Cancer has affected so many families—ours too,” Laura says.

A Sister for Sullivan

And there was more happiness in store for Laura and Mark: In June of 2017, they found out they were once again expecting a baby. “We cried our eyes out with joy,” Laura recalls. “We thanked Jesus for a chance to raise another baby.”

After a loss like theirs, it’s only natural to be nervous, but Laura was determined to not let fear rule her pregnancy. “I didn’t want to lose another baby,” she says. “It was an active daily choice to believe and trust that this baby was going to come home with us.”

On March 2, 2018, their baby girl Miller was born. Her labor lasted just three hours. Miller was perfectly healthy. “The day she was born was a day of true redemption,” Laura says. “Just like her sister, she has changed us from the inside out.”

From the beginning, Miller was an extremely content baby. Now 13 months old, Miller is a very happy toddler. “She’s sweet and inquisitive,” mom Laura says. “She loves music and loves to dance. She’s happiest when she’s eating—aren’t we all? Ha.”

These days for the McCarty family, life is hectic and chaotic and beautiful—and Laura wouldn’t change a thing. She loves working from home, devoting time to her business and also dabbling in other creative fields. She cherishes her time with her Miller, treasures her memories of Sullivan, and embraces each new day.