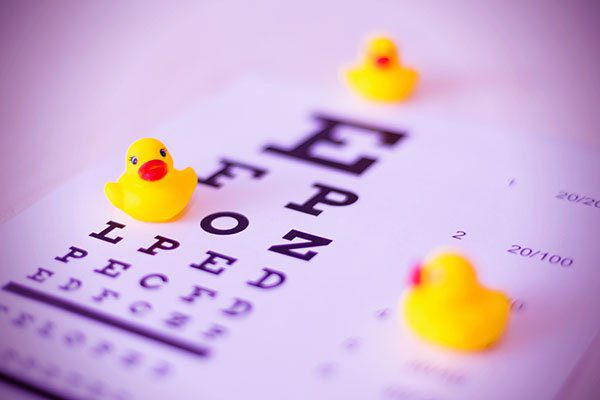 My family and friends thought I was losing my mind when I shared that I thought my 7-month-old had a crossing eye. I brushed it off because it only seemed to happen when she was tired. But at her 1-year checkup at the pediatrician’s office after they did a scan with some fancy machine that examines the eyes to see if they are aligned properly, what do you know?! She failed.

We were referred to a pediatric ophthalmologist, who discovered that she has strabismus, astigmatism, and separate prescriptions in both eyes. She was prescribed glasses and has been in them since. She’s now 3 and has an 18-month-old little sister who (no surprise!) was fitted for glasses at 9 months old.

1. Stock up on pacifier clips.

Yep … the little gadgets that hold a baby’s pacifier actually double as a leash for glasses. We learned the hard way when we were purchasing new lenses three days after my daughter got her first pair. They were so scratched from her ripping them off approximately every 45 seconds that we needed to figure something else out. The polycarbonate lenses are pretty expensive and run us about $75+ a set depending on what your insurance covers. (Our insurance only covers one set a year.)

We go through nine or more sets of lenses a year between prescription changes, broken frames, and scratched lenses. Securing the binky clip on the head strap of the glasses and then attaching the binky clip to the back of their shirts has saved us thousands. Write your phone number on the fabric piece of the binky clip so that lost glasses may make it home.

Ew. I hate that I even typed that word. As a parent struggling to keep glasses on a toddler who is too young to “get it”—I really despised when people would tell me to simply “be consistent.” But they were right. Every time your child rips their glasses off you must be consistent with putting them back on. Place the glasses back over their sweet little eyes and remind them why it’s important they wear them. Over and over.

Having a “glasses routine” really helped my kids get used to their glasses. Glasses come off for most sit-down meals and are put back on after they are cleaned up. This avoids messes (like banana and other unmentionables stuck in the creases between the lens and the frame).

My girls also know they don’t wear glasses for bedtime or naps because ouch—and definitely not safe. In the beginning, we also didn’t allow them to wear their glasses in the car because the strap is a potential strangulation hazard.

4. Let them be responsible.

We’ve tried to instill a sense of responsibility—and we’ve never lost a pair of glasses! Despite their ages, our girls are responsible for putting their glasses away properly. At home, if they are doing a glasses-free activity (such as jumping on the trampoline), they put their glasses in our designated spot (my 18-month-old can do this herself!).

When we’re away from home and they don’t want to (or can’t) wear their glasses, the rule is they must first ask if they can remove them. Our oldest understands it is her responsibility to make sure they’re in a safe place if she isn’t wearing them. I was impressed when one of her lenses popped out at preschool and she brought the lens and frames straight to her teacher, who set them aside until pickup.

Too funny, tacky, or just downright “Harry-Potterish” for you!? Yeah, you’ll be to this point in no time! We’ve made a pair of super-glued (in two different places) glasses work for an additional six months after the initial break. We’ve also found that electrical tape keeps our world spinning: If the frames are a little loose on a baby’s disproportionate head, a little bit of tape gets the job done.

6. Reward and praise them (aka, use bribery).

There. I said it. In our family, we are totally not above bribery. We used whatever we could to keep the glasses on our girls (especially in the beginning). Our youngest easily accepted her glasses, likely due to her age. Your kid’s vice may save you from losing your voice in the early weeks. Once they’ve kept their glasses on all day for a substantial amount of time, offer praise and a reward. Bonus: A fro-yo date is a reward for you too!

Our oldest was asleep when she was fitted for her first pair of glasses, and it wasn’t ideal. Over time, it was clear that the frames were too big. They stretched out and never stretched back! We went through multiple pairs of “flexible” frames before we finally switched to a different brand. Though they’re more breakable, the new ones fit my kids’ faces SO. MUCH. BETTER.

8. Use a pediatric ophthalmologist.

I wish we’d gone to a doctor who specializes in pediatrics the first time to avoid issues such as poor-fitting frames and an incorrect prescription. But once we got to our pediatric ophthalmologist, it’s been smooth sailing. Our oldest loves going to have her eyes checked, and the experience is tailored to toddlers—think stickers, kid-themed eye charts, and special lights that look like animals and make noise to get kids to look where they need to during the exam.

As a mom, I worry that someone will make a rude comment to my 3-year-old about her glasses one day. So to be proactive, we point out some of her favorite people and characters who wear glasses. For example, she loves minions and she loves her Mimi (grandma). Both minions and Mimi wear glasses, so we always point out how awesome it is that they have glasses just like her! And if I see a cute little kid in the store with glasses? You bet I’m going to point it out so my kids understand they aren’t the only ones!

Everyone will tell you about how their third cousin’s sister’s husband’s stepdaughter’s boyfriend’s son needed glasses as that age, and you’ll also hear about the granddaughters who had to have a patch and the aunt who had to have surgery to correct her lazy eye. People will ask, “How did you know your kids needed glasses?” and “Why do your kids need glasses?” Smile, be friendly and tell your story. You’ll also meet my favorite kind of people—the ones who compliment how cute the kids look in glasses!

11. Get a backup pair of eyeglasses

Our backup glasses have saved us when lenses are scratched or frames are being repaired. It also keeps the kids from breaking their glasses on purpose (which my kids haven’t tried yet but Sharon on aisle 9 in Walmart told me the story about when she did it as a kid). Having a backup pair on hand pretty much eliminates any worries about damage.

I hope you learned a few tips and tricks for managing your baby, toddler, or preschooler as they transition into the world of seeing clearly!

Lindy
Lindy Hurless is a wife and mom of two (three if you count her husband!) from Washington state. She is a stay-at-home mom who prides herself in being a “methodical mama”—everything has a place and a label. Aside from that, she loves drinking coffee and eating junk food. To combat that, she plays in a women’s powderpuff football league and works out a lot. She can’t live without her old-school paper calendar and her chapstick.